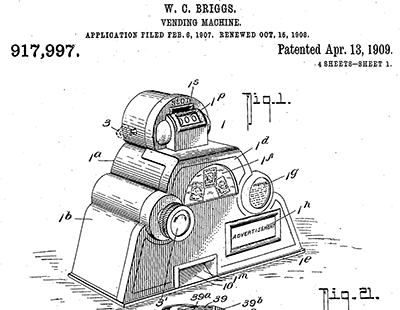 William Cyrus Briggs, inventor, the son of Cyrus and Lydia F. Loring Briggs, was born in Turner, Maine, and educated locally. He moved to Brooklyn, N.Y., where he was an engineer and machinist, and he may also have lived in New Jersey for a time. He afterwards moved to Fayetteville, where he designed one of the first successful automatic cigarette-making machines, and in 1892 he settled in Winston. There he set up his machine tools in a corner of the J. A. Vance Machine Shops, in a move that is regarded as the initial step in the history of the Briggs-Shaffner Company. Briggs's cigarette-making machine was sold, together with the patents for it, to the Murai Brothers, Kyoto, Japan, after Briggs visited Japan in 1898.

The United Cigarette Machine Company of Lynchburg, Va., of which Captain James W. Gerow was president, sued Briggs for patent infringement. The case was heard in Asheville, with Colonel Clement Manly of Winston successfully defending Briggs. Gerow then offered Briggs a position with his company, and Briggs accepted, leaving Winston-Salem in 1913, the very year that Winston and Salem were consolidated. At United in Lynchburg, Briggs designed a totally new machine capable of producing four-hundred thousand cigarettes a day.

At his death in 1918, Briggs was survived by his wife, the former Hope Elizabeth O'Brien; two daughters, Mabel Loring and Hope Elizabeth; and a son, W. C., Jr. Another daughter, Julia Cecil (Mrs. Robert Walker) of Winston-Salem, died in 1915 at the age of twenty-six. Briggs's remains were temporarily interred in a vault in Lynchburg but moved in June to Turner, Maine, for burial in the village cemetery.

In 1842, when a railroad was built through Berwick, Maine, one William C. Briggs opened a "restorator," forerunner of the lunch counter. A special cake made by his wife became noted as Berwick cake. What relationship connected these two men of the same name is not known.

Maine State Museum, Augusta, for a typescript genealogy of the Briggs family.