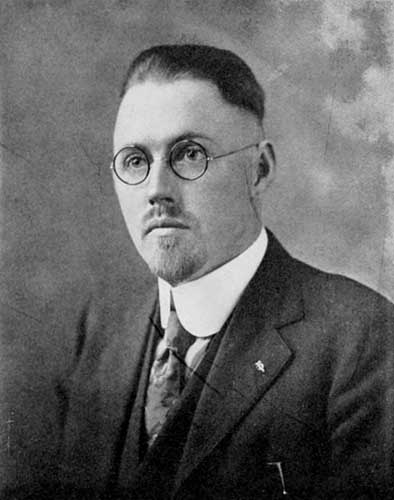 John Romulus (Afterward Changed to Richard) Brinkley, medical maverick, was born in the community of Beta near Sylva, Jackson County, apparently the illegitimate son of Dr. John Richard Brinkley and his wife's niece, Sarah Candace Barnett. The mother died when the son was five, and he was raised by the Brinkleys. The elder Brinkley died about 1896 and the younger Brinkley worked as a telegraph operator and delivered mail until his foster mother died in 1907. During those years, he eagerly read home-treatment books and Bible stories. His photographic memory stored this information for use at a later time. A month after the death of Mrs. Brinkley he married a local girl, Sally Wike, and they remained in the county for about a year while he continued to work as a railroad telegraph operator at Bryson City and Sylva. He, his wife, and a few other people began to travel in the area producing a play of some kind, dancing, and singing to attract a crowd to which Brinkley sold tonics and herb medicines. In 1908 Brinkley, his wife, and a young daughter moved to Chicago where he entered Bennett Medical College, an "eclectic institution." He worked at night and attended school in the day, but after three years he dropped out because of debt and broken health. For several years he drifted about the country, and on one occasion traveled to New York. During his years of wandering with his family, Brinkley began to identify himself as a doctor and offered his services as a "men's specialist" in Knoxville and Chattanooga, Tenn. In the spring of 1913 the Brinkleys were divorced and Mrs. Brinkley and their three daughters (a son had died) returned to her mother's home in North Carolina. Brinkley went to Memphis where he met and married Minnie Telitha Jones, daughter of Dr. Tiberius Gracchus Jones. The couple moved to Greenville, S.C., where Brinkley practiced with James E. Crawford as "Electro Medic Doctors" until a large number of unpaid bills resulted in a jail sentence. Bailed out by his father-in-law, Brinkley and his wife moved to Judsonia, Ark.. in the summer of 1914, where he opened a practice as a specialist in diseases of women and children and was soon highly regarded by many. In less than a year, however, he was enrolled at the Eclectic Medical University in Kansas City where, after a year and the payment of one hundred dollars, he received a diploma. Arkansas was one of eight states that recognized such a 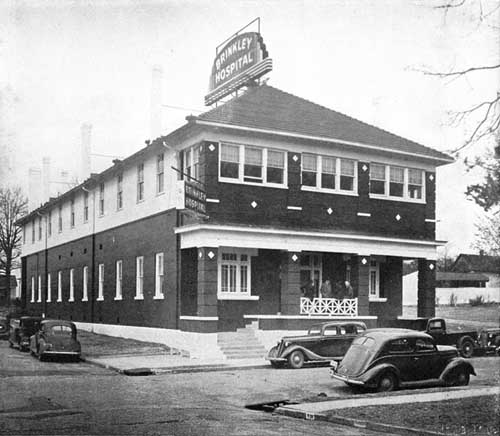 diploma, and he was licensed to practice eclectic medicine in that state. Under interstate reciprocity Kansas also recognized his license when he moved there in 1916. It was in Milford, Kan., that "Dr." Brinkley began his climb to fame and fortune. He developed and publicized his goat gland operation in which he claimed to transplant the sex glands of young buck goats to men, thereby restoring sexual vitality and fertility to impotent or "tired" men. He also advanced other claims for his skill as a surgeon and attracted a wide following. He prescribed medicine by mail and established a powerful radio station to publicize his medical work as well as to broadcast his fundamentalist theology. It was also about this time in 1918 that he purchased a medical diploma fraudulently issued and backdated to 1913 from the National University of Arts and Sciences, St. Louis, Mo.

Brinkley's surgery and his sale of prescriptions brought him millions of dollars before 1930, when the Federal Communications Commission succeeded in closing his radio station. In retaliation, Brinkley ran for governor of Kansas as an independent and came very close to winning although he was merely a write-in candidate. Many believed that if the ballots had been counted more faithfully, and if the ones marked simply "Doc" had been credited to him, he would have been elected. In 1932 he ran again and so split the Democratic vote that Alfred M. Landon, a Republican, won in a year when Democrats were widely victorious in other elections. He then left Kansas and moved to Del Rio, Tex., to be near his new radio station across the border in Mexico. About 1933 he ceased his goat gland operations but continued to stress his prostate operations and to promote his prescription service. Among his medicines was a package of crystals, "Crazy Water Crystals," that was 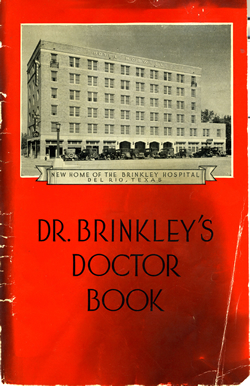 widely advertised. In North Carolina a popular Charlotte radio station broadcast a noon program of "hillbilly music" to promote this product. A later analysis revealed this to be Glauber's salt, a horse physic. The cut-rate competition of another "surgeon" in Del Rio led to Brinkley's removal to Little Rock, Ark., where he established several hospitals specializing in prostate operations which he cited as a cure for high blood pressure, hardening of the arteries, impotency, epilepsy, locomotor ataxia, constipation, diseases of the stomach, bowels, and kidneys, dementia praecox, neurasthenia, and sterility caused by mumps.

In 1938 Dr. Morris Fishbein, editor of the Journal of the American Medical Association, published an article in another journal in which he referred to Brinkley as a medical charlatan. Brinkley sued Dr. Fishbein for libel, but a jury found in favor of Fishbein. This stimulated a great many suits against Brinkley which he lost, and he was obliged to pay large sums of money. Charges of income tax evasion and mail fraud were also brought against him, his wife, and several of his associates. By February 1941 he was forced into bankruptcy. That fall he was in a Kansas City hospital where his left leg was amputated because of complications from a blood clot. The following spring he died in his sleep in San Antonio, Tex., survived by his wife and a son, John Richard, Jr., or "Johnny Boy." He is buried in Memphis, Tenn., in a copper casket he purchased some years before, and his grave is marked by a large bronze statue of a winged victory that once stood at his Del Rio mansion. Brinkley's exploits brought him immense wealth. He owned a number of expensive automobiles, a yacht, and extensive property in various parts of the United States. At times during his career he returned to visit the scene of his youth, and shortly before he was beset by financial troubles he turned over to his son the 6,500 acres he owned there.

The Brinkley Hospital in LIttle Rock, Ar. Courtesy of the Butler Center for Arkansas Studies, Central Arkansas Library System via the Encyclopedia of Arkansas. Available from http://www.encyclopediaofarkansas.net/encyclopedia/entry-detail.aspx?entryID=1105# (accessed May 6, 2013).