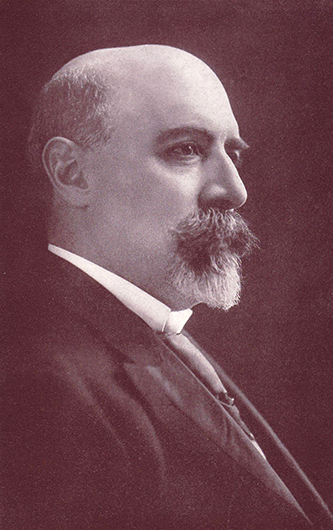 George Hubbard Brown, superior court judge and associate justice of the North Carolina Supreme Court, was born in Washington, N.C. His parents were Sylvester T. and Elizabeth Bonner Brown. His paternal ancestors included the Revolutionary War soldiers General Thomas Holliday and Captain George Hubbard. A maternal ancestor, James Bonner, founded Washington. Brown lived in Washington until 1866, when he left for two years at Horner's School in Oxford. In 1868 his skill as a telegrapher secured him a position in New York City, where he worked at the desk next to Thomas Edison. He returned to live with his parents in 1870 and to study law in Wilson, where they lived. In 1871 he and his parents moved back to Washington, and he began to study law with his future brother-in-law, James E. Shepherd. After passing the bar examination in 1872, he opened a law office in Washington. His law partner was Fenner B. Satterthwaite until the latter's death in 1882.

Active in politics, Brown served several years as chairman of the Democratic party in Beaufort County. In 1880 he campaigned unsuccessfully for the Democratic nomination for Congress from the First Congressional District. As a presidential elector from the First Congressional District, he cast a vote for Grover Cleveland in 1888. After practicing law with John H. Small from 1885 to 1889, he was appointed by Governor A. M. Scales to a vacancy on the superior court in the First Judicial District in 1889. In 1902, Henry Groves Connor defeated him for the Democratic nomination for associate justice of the state supreme court. Two years later he was elected to an eight-year term as associate justice of the North Carolina Supreme Court, and in 1912 he was elected to a second full term. He declined renomination in 1920 because an attack of influenza in 1918 had left him greatly weakened.

Robert Watson Winston called Brown "our Dissenting Judge—he was unwilling to bend the law to meet difficult situations or to win popular favor." According to Winston, Brown was "the acknowledged exponent of the vested interests of the State. . . . On the bench he stood for property and property rights as much as for the rights of persons."

After retiring from the bench in 1921, Brown served occasionally as a special judge appointed by the governor. Throughout his life he was fond of horses and enjoyed hunting. He died in 1926 of bronchial pneumonia. A lifelong member of St. Peter's Episcopal Church in Washington, he was buried in Oakdale Cemetery in Washington. He was survived by his widow, Laura Ellison Lewis, whom he had married on 17 Dec. 1874. They had no children. There is a portrait of Brown in the Supreme Court Building in Raleigh.