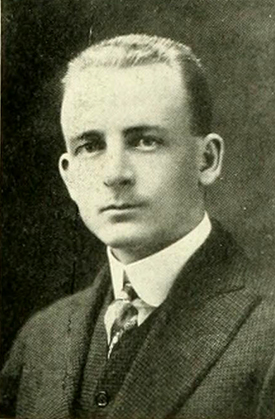 Lenoir Chambers, newspaper editor and biographer of Stonewall Jackson, was born in Charlotte, son of industrialist Joseph Lenoir and Grace Singleton Dewey Chambers. He was graduated from Woodberry Forest, Va., in 1910; received an A.B. degree from The University of North Carolina in 1914; and studied at the Columbia School of Journalism, N.Y., in 1916–17. After working on the Washington staff of the New Republic, he served overseas during World War I as a first lieutenant of infantry with the Fifty-second Infantry, Sixth Division, and later with division headquarters.

After the war, Chambers directed The University of North Carolina's news bureau until 1921, when he joined the Greensboro Daily News; there he was successively reporter, city editor, and associate editor. On the News he was associated with Gerald W. Johnson, also a distinguished North Carolina journalist and historian. In 1929, Chambers became associate editor of the Virginian-Pilot of Norfolk, Va., under Editor Louis I. Jaffe, who that year won a Pulitzer Prize for distinguished editorial writing. Chambers became editor of the Norfolk Ledger-Dispatch in 1944 and editor of the Virginian-Pilot in 1950, after Jaffe's death.

During the 1950s, Chambers's work on the biography of Stonewall Jackson was carried on simultaneously with an intense program of editorial writing during the decade of Virginia's massive resistance to the Supreme Court decision requiring desegregation of the public schools. His associates were awed that he could research and write history at night and during the day direct a forceful editorial page. Irate segregationists were astonished that the advocate of compliance with the Supreme Court decision was also a native North Carolinian and a biographer of a Confederate general. This was a key to Chambers's philosophy: a southerner by birth and by choice, he called upon the South to follow its best traditions, not its worst. The "best in the South" was not an acceptable phrase to him.

The year 1959 seemed to bring a peak to Chambers's career. In that year his two-volume biography of Jackson won critical acclaim, and his 1959 editorials won him the 1960 Pulitzer Prize. The Virginian-Pilot commented editorially after his death, "Mr. Chambers in the school issue defended law and justice and enlightenment and dignity and these were things he insisted upon year in and year out, consistently."

After retirement in 1960, Chambers wrote Salt Water and Printers Ink, a history of the Norfolk newspapers and their relationship with Tidewater Virginia, and Notes on Occupied Norfolk, a historical monograph. In 1960 he received the LL.D. from The University of North Carolina.

Chambers was a trustee of Woodberry Forest, Norfolk Academy, and the Norfolk Public Library, Va. He was president of the Norfolk Forum and a member of the American Society of Newspaper Editors, the Virginia Historical Society, the National Conference of Editorial Writers, Phi Beta Kappa, Sigma Alpha Episilon, and the Virginia and Norfolk Yacht and Country Clubs.

Chambers was married in 1928 to Roberta Burwell Strudwick. They had a daughter, Elizabeth Lacy (Mrs. Charles O. Burgess), and Mrs. Chambers had a son by a first marriage, Robert Strudwick Glenn.