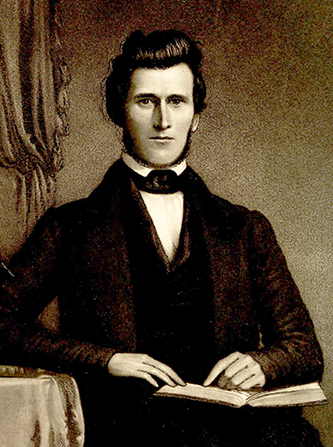 Josiah John Finch, clergyman and educator, was born in Franklin County, the fourth child and oldest son of Caswell and Temperance Bridges Finch. According to his son's biographer, Caswell Finch spent forty years of his life as a teacher who "stood without rival" in the region in which he lived. Young Josiah manifested an early interest in books and learning, and gained the rudiments of an English education from his parents. He experienced a religious conversion at the age of seventeen, joining the Maple Springs Baptist Church; he was ordained to the ministry one year later. Sensing his need for further education if he was to be an effective minister, Finch spent two sessions at the Louisburg Male Academy, then under the care of John D. Bobbitt, and attended the Raleigh Academy during the better part of 1834. His formal education was completed with studies at Wake Forest College in 1836–37.

Upon his ordination by the Maple Springs Baptist Church, Finch became pastor of his home congregation (1832–34). Later he served the Baptist churches in Edenton (1835–37), New Bern (1838–44), and Raleigh (1845–48). Upon their removal to Raleigh, Finch's wife began the operation of Sedgwick Female Academy. Within two years the school attained such rank and prominence that Finch was obliged to devote a considerable amount of his time and energies to its work. The combined duties of both school and church soon took a heavy toll upon his delicate health, and he decided, reluctantly, to relinquish his pastoral duties with the congregation in Raleigh, while maintaining his interest in Sedgwick Academy. His death—from consumption—occurred some eighteen months later.

Finch's published writings included a booklet entitled Conditions of Discipleship, published in New Bern in 1842, and occasional articles for the Biblical Recorder, a journal of the Baptist denomination in North Carolina. A collection of his sermons was published in 1853 by his brother, Gilbert Mortier Lafayette Finch. Of this collection, George Washington Paschal noted: "The sermons are on a wide variety of topics and show clearness of conception and good analytic powers."

Warmly attached to the Baptist State Convention and its objectives, Finch was a "special agent" for Wake Forest College in 1844. He also served the convention as recording secretary (1842–43, 1845–46), corresponding secretary (1845–47), and member of its board of managers for most of the years after 1836. An indication of the esteem in which Finch was held by his colleagues can be seen in the very warm and glowing tribute paid to his memory by the convention's "Committee on Special Changes" (Obituaries) at the 1850 session of that body.