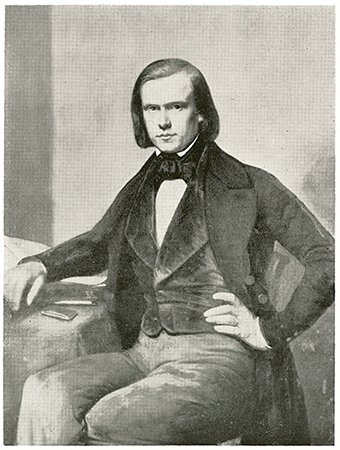 Jesse Dickens Graves, physician and artist, was born in Granville County, the son of Henry Lewis Graves and his wife, Mary Brown Dickens. He was a student at The University of North Carolina in 1837–38, but soon determined to study art in France. On 11 Feb. 1839 he sailed for Paris. His first few days there, he later recalled, almost "cured" him of a desire to study under French artists. Help came in an unusual way, however. Sitting by an open window one day, he saw a tame dove pitch on the ledge. He picked up the bird and tied a note in English around its neck explaining who he was and the difficulty he was having with the language. A knock at his door soon afterwards announced the presence of the dove's owner. A charming English woman spoke to young Graves first in French and then in English. She then taught him enough French to enable him to begin making his way around the city, and his old ambition returned. He was soon engrossed in the study of art and music. After more than seven and a half years in Paris, Graves sailed for home on 2 Sept. 1846. Among his possessions were a number of musical instruments and a large quantity of artist's supplies and equipment, to say nothing of the works he had produced during his stay. In the North Atlantic the ship encountered heavy seas, and much of his equipment was either washed overboard or thrown over purposely to lighten the ship. Some of the surviving examples of his art were damaged by water.

When the ship docked in New York, Graves, then a mature man of twenty-seven, was so distressed at his loss that he decided to remain in the city and study medicine. In due time he returned to North Carolina where his parents were then living in Moore County. Dr. Graves began to practice medicine in the Union Church community, about five miles east of Carthage, the county seat, on the Salem to Cross Creek plank road. In a few years he moved to Moffitt's Mill in adjoining Randolph County. There, on 25 Mar. 1854, he married Mary E. Foust whose cousin, Dr. Julius Foust, later was president of the State Normal and Industrial School for Girls in Greensboro (now the University of North Carolina at Greensboro). Several times during the Civil War Graves attempted to join the army, but his services at home were deemed too great for him to be accepted.

About 1930 one of Graves's sons gave The University of North Carolina a number of his father's medical books together with a large self-portrait painted when Graves was a young artist, in 1848. It now hangs in the North Carolina Collection of the university library. An oil painting of Graves's hands, which he also did as a young man, is in the possession of descendants. In the 1950s a granddaughter gave the North Carolina Collection examples of some of the stone engravings that Graves had done in Paris depicting children with whom he had made friends during his stay there.

Walker, Harriette Hammer. "He Gave Up Art For Medicine: A Storm at Sea, During Which He Lost Much of His Valued Treasure, Changed the Career of Dr. J. D. Graves, Native North Carolinian." The Greensboro Daily News. November 30, 1930.