Andrew Loretz, German Reformed clergyman, was born in Chur (Coire) in the canton of Graubünden (Grisons), Switzerland, the only son of the Reverend Andrew Loretz. He received a formal education in Kaufbeuren in the kingdom of Bavaria until May 1779.

In 1784, his father, the Reverend Barnard Willy, and the Reverend Peter Pernisus were sent to Pennsylvania. Acknowledging the need of ministers there, the Reverend John Jacob Kessler, deputy in the classis of Amsterdam, solicited and even sent a letter of recommendation for the younger Loretz. In 1786 Andrew arrived in Baltimore with a passport signed by the burgomaster of Chur. At this time, he married a widow, a Mrs. Schaeffer, formerly of Hagerstown, Md., and probably was ordained. His father left for Switzerland in the same year.

In the fall of 1787 or 1788 Loretz went to Lincoln County, N.C., where in 1789 he entered his first land grant for twenty-two acres. Then, from Jacob Shuford he bought land adjoining the Schoolhouse Church where the Lutheran and German Reformed congregations met. On the Shuford land, he built a two-story brick house measuring twenty-six feet by thirty-six feet. The dark red bricks on the east wall of the existing house form "A. L. 1793," the initials and date of the builder. Down the center of the east wall, the dark red bricks form two hearts and a cross. The original log kitchen is gone. The house stands one-half mile from the site of the School-house Church, where Daniel's Reformed and Lutheran churches later were established. 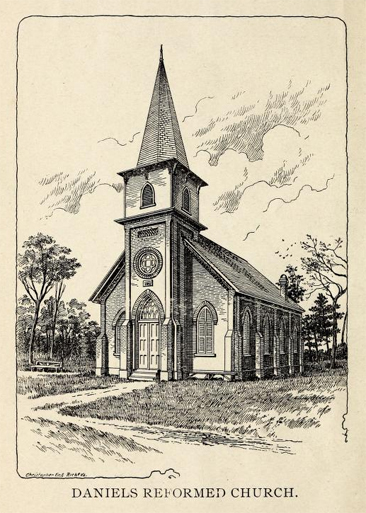 Due to the scarcity of German Reformed ministers, Loretz's charge extended from the Haw River of North Carolina to the Saluda River of South Carolina. Between 1788 and 1812 he was the pastor of the Schoolhouse Church, which began as a small log building; a frame church was built during his pastorate. Concurrently (1789–95), he was counted on as the pastor of Lower Stone (Grace) Church in Rowan County. In the year of George Washington's death, Loretz gave a funeral sermon for the former president. He laid the cornerstone of Lower Stone Church in 1795, but, due to the lack of money, he did not perform the dedication ceremonies until November 1811. In 1802 he ordained George Boger at Savitz Church in Rowan County.

At the time of his death, Loretz owned six horses which he had used for his travels. For example, he visited Guilford County four times a year, particularly the Stoner Church. His wide range of activities indicates that he worked hard to bring the church to the frontier.

Throughout his lifetime, he had a genial disposition and enjoyed people. He was fluent in German, French, and Latin, although his services were only in German. Jefferson's Manual was in his library, which consisted mainly of theological books. With over nine hundred acres, cattle, sheep, hogs, four slaves, and a large household, Loretz was wealthy for his time. After a Sunday-evening ride from St. Paul's in Catawba County, he died suddenly without a will and was buried in Daniel's graveyard. His five children had guardians who helped settle the estate.

Bernard W. Cruse and others, Foundations of Lutheranism in North Carolina (1973).

Jacob Calvin Leonard, The Southern Synod of the Evangelical and Reformed Church (1940).