Robert Mellyne, silversmith, was living in North Carolina for some years prior to 1702 and may well have been the colony's earliest silversmith. His name, with all its variations of spelling (Moline, Mellyn, Morlines, Meline, Mulline, Mullines, Mollyn, Moliones, Moloines), appears numerous times in the Colonial Records, the North Carolina Higher-Court Records, 1670–1696, and the Beaufort County Deeds (vol. 1). In the wills of David Makee and Edward Wood, which Mellyne signed as a witness, his name is spelled "Mellyne." 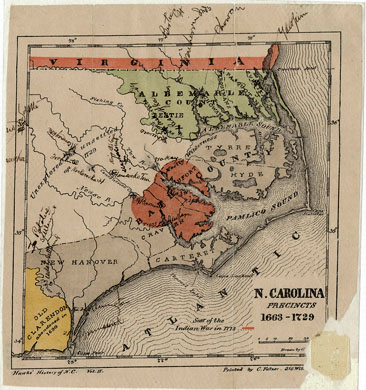 The earliest extant reference to Mellyne occurs in the county court records for November 1693, when "Robert Mulline" was called to serve on the grand jury. Subsequent documents reveal that both Mellyne and his wife Ellinor were involved in several cases brought before the courts. In one such case, Crown v. Fewox, tried in the Council Court of Albemarle during November–December 1696, the witness Peter Middleton testified that tools "Mr. Fewox Fech out of Virginia" were "Fewoxis Tooles" and that "Mollines was allonge with them to Doe itt that is to be said to quoine money."

A deed of land dated 1 July 1702 indicates that Mellyne purchased from John Lawson (through Lawson's legal representative) Narrows, a tract of land containing 640 acres along the "north dividing creek in Pamtico River." In the same deed book is a document dated 12 June 1703 giving rights of entry to this property to Philip Howard. The owner is identified as "Robert Mellyne of Bath County, Silversmith." Another such document in which Mellyne sold rights of entry to William Price also designates him as a silversmith.

Mellyne made his will on 29 Dec. 1708, and he had died by 4 Jan. 1708/9, when the will was probated. Since there were no children, he willed his property to his sisters still living in Ireland and to their heirs on the death of Ellinor Mellyne, wife of the craftsman. Edward Mackswine, a nephew, claimed the property in 1720.

The appearance in his will of the words "still living in Ireland" suggests that Mellyne was of Irish extraction. No silver made by him has been found, and nothing is known about him except through court records and deed books. One document contains a reference to a suit brought against him by Jonathan Bateman in 1697 for failing "to fix the lock of a gunn for the plaintiff," so Mellyne may also have been a gunsmith of sorts. At any rate, his designation as "Robert Mellyne, Silversmith" supports the suggestion that he may have been the first such craftsman to live in North Carolina.