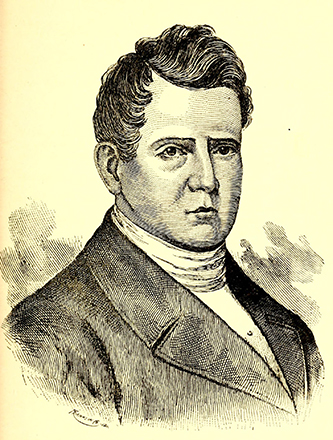 Young Thomas attended Doylestown Academy, a famous classical school in its day, where his master, the Reverend Uriah Dubois, called him "a vigorous and successful student." He was graduated from the University of Pennsylvania on 4 Jan. 1816, valedictorian of a class of nine. He had gone to the university intending to be a lawyer, but before graduation he decided to enter the Christian ministry, a decision due largely to the influence of his mother, a devout Quaker. An earnest study of the New Testament led him to the Baptist faith, and in 1817, after a year of theological training, he went to eastern North Carolina as a missionary. There he was befriended by Martin Ross, a tower of strength in the early Baptist work in North Carolina. Driving together in a buggy, Ross, fifty-five years old, and Meredith, twenty-two, made many evangelistic trips in the eastern part of the state. A deep friendship developed between the two, a relationship that several have compared to that of Paul and Timothy, his "own son in the faith."

Between 1819 and 1837 Meredith was pastor successively of churches in New Bern, Savannah, Ga., Edenton, and, again, New Bern. During these years he became an important denominational leader in the state. One of the fourteen founders of the North Carolina Baptist State Convention organized in 1830, he drew up its constitution and wrote—at the convention's request—a letter to North Carolina Baptists explaining the necessity of the new enterprise and its vast possibilities. George W. Paschal, in his History of North Carolina Baptists, compares this document with the Declaration of Independence. It has the same clear statements and interpretation of pertinent facts, the same lucid reasoning, the same enthusiasm for the new undertaking, the same calm courage, and the same vision of future success. Meredith served at different times as secretary, vice-president, and president of the convention. On special occasions in the convention and in churches, he was much in demand as a preacher. Of his sermons William Carey Crane, an eminent theologian of his time, said that they "did not sway men so much by touching appeals as by presenting the truth to them with irresistible power." His sermons were the product of a great intellect as well as a devout heart.

He was keenly interested in the education of young people. So far as the records show, Paschal wrote, when Meredith came to the state in 1817, he was the only minister with a classical education. One of the three purposes of the convention, stated in the constitution that Meredith drew up, was "the education of young men called of God to the ministry." Wake Forest Institute (now Wake Forest University), which opened in 1834, received his staunch support. In its first year he was offered the chair of mathematics and moral philosophy; in 1838 he was elected president of the board of trustees. In his concern for the education of young women, Meredith was far ahead of his time. In 1838, as chairman of a committee, he offered a resolution urging the convention to establish "a female seminary of high order . . . modeled and conducted on strictly religious principles but . . . as far as possible free from sectarian influence." The convention adopted the resolution but took no steps towards carrying it out. Sixty-one years later, in September 1899, the Baptist Female University opened its doors; in 1909 it was renamed Meredith College in honor of the proposer of that 1838 resolution.

Since the organization of the convention, there had been discussion of the need for a periodical to serve as a link between the convention and the churches and to unify Baptists across the state. Thomas Meredith began to meet that need when, in January 1833, he issued the first number of the Baptist Interpreter. This monthly paper was so well received that he was encouraged to publish a weekly. The Biblical Recorder, replacing the Interpreter, made its first appearance in January 1835; in 1838 Meredith gave up his pastorate in New Bern and moved to Raleigh in order to devote his full time to the Recorder. The weekly paper, still published in Raleigh, continues to be the journal of the North Carolina Baptist State Convention.

Meredith's ill health and the Recorder 's serious financial difficulties were obstacles that made the greatness of his work all the more remarkable. J. D. Hufham, one of the younger leaders of the convention, wrote of him: "To it [the Biblical Recorder] he devoted himself with perfect singleness of heart. To the work he brought a vigorous, well-trained intellect, courage both moral and physical to an extraordinary degree; great decision of character, which took small account of obstacles or opposition; and patience which held him to his undertakings where others would have given up." Elsewhere Hufham commented on the chief characteristics of his style—simplicity and strength. "One might read through whole columns of his editorials without finding a single obscure sentence." Both in his editorials and in his answers to questions from correspondents, his keen mind and sound judgment are evident. There are also occasional touches of the humor that, according to a close friend, made him a delightful companion.

In the early, formative years of the convention, the years of Meredith's editorship, his constructive leadership was of great value. He dealt well with sharply divisive issues that arose in the convention and in the churches. Among the most controversial were slavery (which he regarded as an evil of the greatest magnitude), the antimissionary movement, temperance, the break with the Triennial Convention located in Philadelphia, and the formation of the Southern Baptist Convention.

Meredith was instrumental in preventing a disastrous cleavage in the Baptist denomination in North Carolina after Alexander Campbell, founder of the Disciples of Christ, made a trip through the state. Campbell's denomination differed with Baptists on the question of immersion, holding that it was essential to salvation, not a symbol of salvation. Meredith's series of articles in the Recorder on Campbellism was the most powerful influence in restoring unity. His ability to deal with controversy drew frequent comment. William Carey Crane said that in controversy he "wielded a Damascus blade." He wrote with vigor and uncompromising conviction, yet with fairness to his opponent. He showed the "tact and ingenuity" for which another contemporary praised him. Campbell, his most formidable opponent, wrote in his own paper, the Millenial Harbinger, that Meredith "wrote like a gentleman" and commended his "courtesy and good manners."

In later generations he has been acclaimed the greatest single influence in Baptist history in North Carolina. Thomas Skinner, himself influential in Baptist affairs, considered him "undoubtedly the ablest man who has yet appeared among us." J. W. Moore, author of the History of North Carolina, declared: "In the history of North Carolina Baptists Meredith surpasses all others in importance." J. W. Bailey, himself editor and the son of an editor of the Biblical Recorder, wrote of Meredith's influence on North Carolina Baptists: "In his twenty years as editor he brought them into unity of faith and work; he set their standards, cast their mold of thinking, and fixed the purpose of their lives and of the lives of hundreds of thousands who came after them."

In 1819 Meredith married Georgia Sears, and the couple had eleven children: Laura, Claudia, Marcus, Bettie, Cordelia and Cornelia (twins), John, Luther, and three who died in infancy. His wife and six of his children survived him. The funeral service was held on 18 Nov. 1850 in the Baptist Church of Raleigh, and he was buried in the Raleigh City Cemetery. Meredith College has two portraits of Meredith; one, copied by his granddaughter, Ada Tolson Ralls, from a portrait by Anne Peale, hangs in the boardroom of the presidential suite in the Livingston Johnson Administration Building. The other, together with a portrait of his wife, is part of the Meredith Historical Collection in the Julia Hamlet Harris Room of the Carlyle Campbell Library.

Some interpretations of Thomas Meredith’s views on slavery have omitted or selectively included important details about his own involvement and perpetuation of the institution. Though Meredith professed a general wish to see the end of slavery, there are many key facts of which modern researchers must be aware. After Meredith's relocation to the South, he embraced the role of slaveholder, possessed a number of enslaved people throughout the remainder of his life and exposed these individuals for sale as collateral for debts on multiple occasions. Meredith often used the Bible to justify slavery’s continued existence, openly and fiercely attacked abolitionists, and actively defended the institution in print through the columns of his newspaper and a self-published proslavery pamphlet entitled Christianity and Slavery (1847). In his pamphlet, he argued that slavery benefitted the enslaved and that the institution was “wholly inoffensive,” dismissing anti-slavery criticisms as “unreasonable and unjust.” Influential contemporaries, religious or otherwise, likewise acknowledged or celebrated his support and defense of slavery, betraying Meredith’s true feelings on the subject.

North Carolina General Assembly. "A Joint Resolution Honoring the Life and Memory of Thomas Meredith, on the Occasion of the Centennial of the Granting of the Charter to Baptist Female University (Meredith College) by the North Carolina General Assembly." 1991. https://www.ncleg.net/sessions/1991/bills/house/html/h121v2.html (accessed October 29, 2013).

Cathcart, William, editor. "Meredith, Rev. Thomas." The Baptist Encyclopaedia: A Dictionary of the Doctrines, Ordinances ... of the General History of the Baptist Denomination in All Lands, with Numerous Biographical Sketches...& a Supplement. Philadelphia, Penn.: Louis H. Everts, 1883. 785. http://books.google.com/books?id=JpDVYXtSxiAC&pg=PA785#v=onepage&q&f=false (accessed October 29, 2013).

Finn, Nathan A. “'The Ablest Man Who Has Yet Appeared Among Us' Remembering Thomas Meredith (1795–1850)." Baptist State Convention of North Carolina. Archived at: http://web.archive.org/web/20100710034850/http://www.ncbaptist.org/fileadmin/ncbaptist.org_graphics/Admin/Docs/Microsoft_Word_-_The_Ablest_Man_Who_Has_Yet_Appeared_Among_Us.pdf (accessed October 29, 2013).