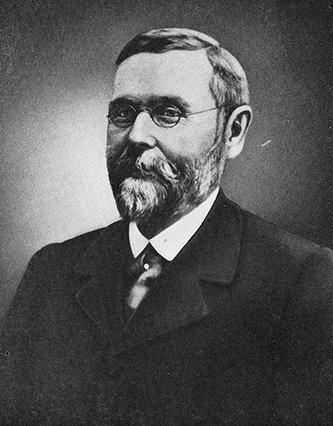 Patrick Livingston Murphy, psychiatrist, served for almost twenty-five years as superintendent of the Western North Carolina Hospital in Morganton. He was the son of a wealthy Sampson County couple, Patrick and Eliza A. Faison Murphy. His father was a successful lawyer and businessman who served in the state legislature during the Civil War; his mother was a member of a family prominent in Sampson and Duplin counties. His parents provided Murphy with an education in the best schools and academies of the time. He attended the Male Academy at Clinton, Colonel Tew's Military Academy in Hillsborough, and the Bingham School. The outbreak of the Civil War postponed his further formal education. In 1864 and 1865 he taught at The Oaks and at Mebane. After the war Murphy began the study of medicine under a preceptor, his family physician, before attending one course of lectures at the University of Virginia (1869–70). The following year he completed a second course of lectures at the University of Maryland and was graduated in March 1871.

For a short time Murphy practiced medicine in his native Sampson County, but he soon moved to Wilmington, where he joined Dr. William J. Love in general practice. Murphy came to dislike the routine of private practice and decided to seek experience that would allow him to compete for the superintendency of the Western North Carolina Asylum for the Insane, then under construction. Consequently, in March 1879 he accepted the position of assistant physician of the Western Virginia Asylum, at Staunton, where he remained for three years. The training he received at Staunton and the recommendation of his superiors led to his election in December 1882 as superintendent of the Morganton asylum.

Assuming his duties in January 1883, Murphy guided the hospital through a quarter century of growth and innovative therapy. Under his administration, the Morganton hospital's capacity grew from 150 patients to well over 1,000. Murphy opposed the idea that custodial care for the insane was of primary importance. He considered an asylum to be a place of treatment for the sick and conducted a successful campaign to have the word "hospital" substituted for "asylum" in the titles of all state mental institutions. Murphy also abandoned the use of traditional restraint devices such as the strait-jacket and instituted a program of occupational therapy. This therapy consisted of outside work of benefit to the hospital as well as the patient; as a result, the Morganton institution became an almost self-sufficient community with its own farm, dairy, and gardens. Later, Murphy introduced the colony system of patient care, whereby cottages were built away from the main hospital building to serve both as the intermediate phase of treatment for patients soon to be discharged and as a desirable alternate to inpatient care for those considered incurable. In 1895 he began a training school for psychiatric nurses at the hospital.

A highly respected member of state and national medical groups, Murphy belonged to the North Carolina Board of Medical Examiners from 1884 to 1890. In 1897 he was elected president of the state medical society. He served on the executive council of the American Medico-Psychological Association, the forerunner of the American Psychiatric Association. He also served for one term as a director of the state school for the deaf.

Murphy married Elizabeth (Bettie) Waddell Bumgardner in 1878, and they had four children: Malinda McCorkle, William Alexander, James Bumgardner, and Robert. He was buried on the grounds of the Morganton hospital.

Pamphlet of proceedings and addresses connected with the presentation of an oil portrait of Murphy to the state library at Raleigh (North Carolina Collection, University of North Carolina, Chapel Hill).

Proceedings of the American Medico-Psychological Association (1910).

Transactions of the Medical Society of the State of North Carolina (1908 [portrait]).

Patrick Murphy was the