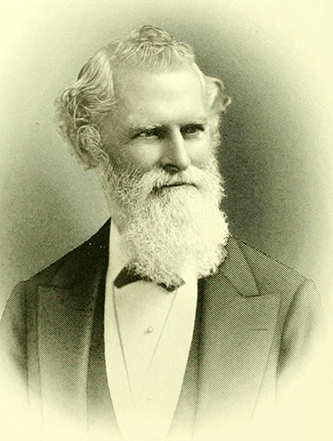 George Washington Rains, army officer, educator, and author, was born in Craven County, the eighth child of Gabriel M. and Hester Ambrose Rains. He attended New Bern Academy and in 1838, after his parents had moved to Alabama, entered the U.S. Military Academy at West Point. In 1842 Rains was graduated third in a class of fifty-six. As a second lieutenant in the Corps of Engineers he was stationed first at Boston and then with the Fourth Artillery at Fort Monroe, Va. After a brief term as assistant professor of chemistry and geology at West Point, he saw action in the Mexican War in which he was brevetted major for gallant conduct. In 1847–48 he served as aide-de-camp to Generals Winfield Scott and Gideon Pillow and the following year was assigned to duty in New Orleans. He later fought in the Seminole War.

On 23 Apr. 1856 Rains married Frances Josephine Ramsell of New York. He was promoted to captain in 1856 but resigned the same year to become president of the Washington Iron Works and later the Highland Iron Works, both of which were located in Newburgh, N.Y. By 1861 he had obtained a number of patents for inventions relating to steam engines and boilers.

When the Civil War began, Rains enlisted in the Confederate army and was commissioned a major; a year later he was promoted to lieutenant colonel. Assigned the task of procuring gunpowder, Rains established government powder mills at Augusta, Ga., that produced 2,750,000 pounds of gunpowder during the Civil War. Rains was also put in charge of the collection of niter from caves in the South and published a pamphlet, Notes on the Making of Saltpetre from the Earth of the Caves. His efforts quickly led to the creation of the Nitre and Mining Bureau of the War Department.

After the war Rains remained in Augusta and became professor of chemistry at the Medical College of Georgia in August 1866. Eventually named dean of the college, he served on the faculty until 1894. He was the author of Rudimentary Course of Analytical and Applied Chemistry (1872) and History of the Confederate Powder Works (1882). Rains died in Newburgh, N.Y.

Lewis Historical Pub. Co. "Geo. W. Rains." Engraving. Genealogical and family history of southern New York and the Hudson River Valley : a record of the achievements of her people in the making of a commonwealth and the building of a nation. New York : Lewis Historical Pub. Co. 1914. https://archive.org/stream/genealogicalfami02reyno#page/n245/mode/2up (accessed October 11, 2013).