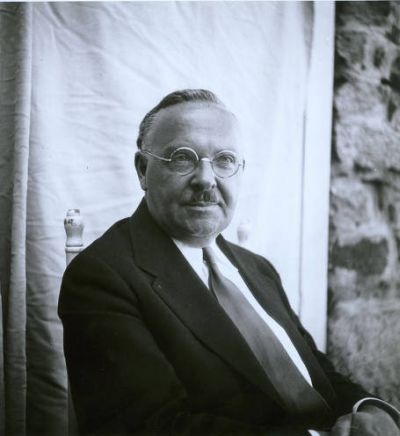 John Andrew Rice, educator and founder of Black Mountain College in Black Mountain, was born near Lynchburg, S.C., the son of a Methodist minister of the same name and the nephew of Senator "Cotton Ed" Smith of South Carolina. Rice attended the Webb School in Bellbuckle, Tenn., and Tulane University. In 1911 he was chosen Rhodes Scholar from Louisiana and went to Oxford University as a student of jurisprudence. On his return from Oxford in 1914, he taught at the Webb School. Rice was a graduate student in the classics at the University of Chicago in 1916–17 and served in military intelligence in 1918–19. In 1920 he was named associate professor of the classics at the University of Nebraska, eventually becoming chairman of the department. During this period he served on the American Rhodes Scholarship Committee. In 1928–29 he taught classics at New Jersey College for Women and then accepted a fellowship from the Guggenheim Foundation to study in England the works of Jonathan Swift, on which he became an authority.

Since his Oxford days Rice had been known as a sharp critic of American higher education. Because of Rice's liberal ideas about education, Hamilton Holt chose him in 1930 to be professor of classics at Rollins College, Winter Park, Fla., which the liberal Holt was promoting as the most exciting place in American higher education. But at Rollins Rice soon became involved in issues of academic freedom, and after a strenuous battle on the subject Holt dismissed him, thereby bringing down on Rollins censure from the American Association of University Professors.

As a result of this conflict, three professors and fifteen students left Rollins with Rice and looked about for a place in which to establish a new college devoted to the principles of democracy and academic freedom. They settled on the Blue Ridge Assembly of the YMCA at Black Mountain, which would be available to them from October to May at a nominal fee, and named the new institution Black Mountain College. The group conceived of the institution as having a minimum of administrative apparatus: no president, but a presiding officer to be known as the "rector" who could be recalled from the office at the will of the faculty, and no deans. There was a treasurer. Rice became rector in 1934 and remained in that office until 1938. Other faculty and more students were recruited. The curriculum was to be whatever could be offered with the faculty available. A student could elect what he pleased from what was offered, and much of the course work would take place in informal discussion groups. In line with Rice's conviction that the whole person should be educated, art was to be made the center of the curriculum. Rice believed that art would not only educate the senses and emotions but also would teach the lesson of integrity to one's self. The doctrine of integrity was foremost in Rice's thinking. He challenged insincere and unthinking beliefs. In every situation the students must learn to think, and Black Mountain had a great variety of situations since it operated as a democratic community with many necessary services being provided by the faculty and students. Democratic discussion between faculty and students, group enactment of student rules and standards, and participation in an assortment of community enterprises, it was thought, all combined to develop a personality ready for intelligent living and public service.

The college was not, however, anti-intellectual. At one time or another it offered not only courses in the classics, history, and economics but in literature, languages, the sciences, and mathematics. Graduation was determined not by credits or years of attendance, but by readiness. Those who aspired to graduation must sometime at the end of two or three years take a general subject matter examination written by the faculty for each examination period. If the faculty found the aspirant's examination satisfactory, he was then admitted to a major of his own choosing. The term of major study was to be determined by the student's own feeling of readiness for examination—oral and written—in his subject by a specialist in the field from outside the college. Black Mountain was never certified as a degree-granting institution by the Southern Association. As a result many students dropped out to enroll elsewhere and hardly a score was ever certified for graduation.

In 1939 the college bought a property on Lake Eden west of Black Mountain village where students and faculty built a studies building that has since been a model for structures in other institutions. The college went on to have an enrollment of just over a hundred after World War II and a faculty of sixteen. Its most famous art teacher was Josef Albers, a German refugee. He and his wife, Ani, a weaver, drew many students. The result was that the college became famous as an art school, and many luminaries in the national and international art world of the fifties and sixties had been teachers or students there. After Albers left, it became prominent as a school of poetry under the American poet Charles Olson, who founded the Black Mountain Review and developed a number of exciting poets. For financial reasons, the college ceased to exist in 1955.

Rice left the college in 1940 after his faculty peers had charged him with self-aggrandizement and self-indulgence. Moving to South Carolina, he became a writer and in 1941 published his autobiography under the title I Came Out of the Eighteenth Century, the Harper 125th Anniversary Prize book. He had come to believe that he had lived too much in opposition, that there must be a world of law, but that the ideal person would arrive at truth using the Socratic method of questioning and also have that love of his fellows that inhered in the teachings of Christ. Though repelled by the self-centered and egotistic competitiveness of the professional artist, he finally felt that he had come into his true calling when he became a creative writer. Rice published short stories in Colliers ' magazine and in the New Yorker. These were collected into a volume entitled Local Color, published in 1959. Though he had built his college on negations, it managed from his foundations to pioneer many of the freedoms that characterized the changes in conventional colleges in the 1960s.