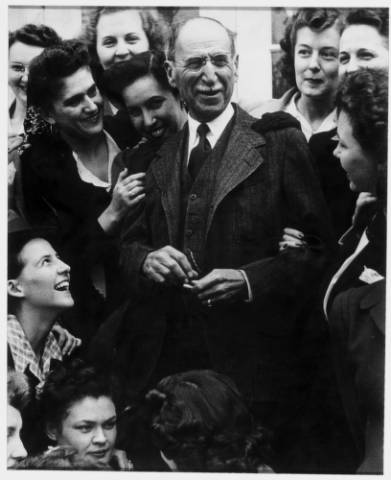 Milton Joseph Rosenau, epidemiologist and founder of the School of Public Health at The University of North Carolina, was born in Philadelphia, Pa., the son of Matilda Blitz and Nathan Rosenau, a Jewish merchant. He attended the Philadelphia public schools before entering the University of Pennsylvania, where he received the M.D. degree in 1889. Later he studied at the Hygienic Institute in Berlin (1892–93) and at the Pathological Institute in Vienna and the Pasteur Institute in Paris (1900).

Rosenau served as assistant surgeon with the U.S. Marine Hospital Service (now the U.S. Public Health Service) in Washington, D.C. (1890–92) and as quarantine officer at San Francisco (1895–98) and in Cuba (1898). In 1899 he was appointed director of the Hygienic Laboratory (the nucleus of the National Institute of Health) of the U.S. Public Health Service, a research facility, where he produced important work on the epidemiology of diphtheria, typhoid fever, yellow fever, malaria, botulism, and the tubercle bacillus, and where his studies on milk sanitation greatly helped popularize the pasteurization process in the United States.

In 1909 Rosenau was appointed Charles Wilder professor of preventive medicine at the Harvard Medical School, where in 1913 he established and served as director of the first school of public health in the United States; from 1922 until his retirement in 1935, he was professor of epidemiology in the school. Also in 1913 Rosenau published his most important work, Preventive Medicine and Hygiene, which in its tenth edition remains the standard text on the subject. With his long teaching career and his influential textbook, Rosenau was so instrumental in educating health workers in the advances of microbiology and immunology that he was regarded as the father of preventive medicine in the United States.

At his retirement from Harvard in 1936, Rosenau went to Chapel Hill to establish the Division of Public Health within the School of Medicine; in 1940 it became a separate school with Rosenau as dean. The school was the result of the collaborative efforts of Dr. Charles S. Mangum, dean of the medical school, Dr. Carl V. Reynolds, state health officer, and Consolidated University president Frank Porter Graham to set up a major training and educational center for public health personnel in the Southeast. It was the eighth school of public health organized in the United States, and the only one between those at the Johns Hopkins University in Baltimore and Tulane University in New Orleans.

Securing the services of Rosenau, with his national reputation and proven administrative skills, ensured the success of the school, which immediately attracted students from across the country as well as from Central and South America. In 1936 the U.S. Public Health Service transferred its venereal disease laboratory and its training center for health personnel for the states from Delaware to Florida to the new school. The first project funded by the Z. Smith Reynolds Foundation was for a venereal disease study by the North Carolina State Board of Health, which subcontracted much of the work to the new school in 1939. Rosenau secured funding for further venereal disease research from the Rockefeller Foundation, as well as funds from the Kellog Foundation for establishing a field training program for public health workers. In 1946 he had assembled a faculty of twenty-four, the largest of the schools of public health, which offered public health courses in administration, education, nursing, sanitary engineering, nutrition, industrial hygiene, biostatistics, parasitology, and other disciplines. Rosenau saw the school move in 1939 from cramped quarters in Caldwell Hall to a new building shared with the medical school, MacNider Hall, built with federal funds largely secured by Rosenau's efforts.

At the time of his death from a heart attack, he was president-elect of the American Public Health Association; in 1935 he had received the Sedgwick Memorial Medal, the association's highest award for distinguished service in public health. In 1912 he was awarded the Gold Medal of American Medicine for service to humanity.

Rosenau was married in 1900 to Myra F. Frank of Allegheny, Pa., and they were the parents of William Frank, Milton Joseph, and Bertha Pauline. Myra Rosenau died in 1930, and Rosenau married the widow Maud Heilner Tenner in 1935. The Rosenaus lived on Laurel Hill Road in Chapel Hill where they pursued their interests in gardening; he was also an avid tennis player. When the university built a handsome new building for the School of Public Health in 1963, it was named in Rosenau's honor. Portraits of Rosenau can be found at the schools of public health at Chapel Hill and Harvard.