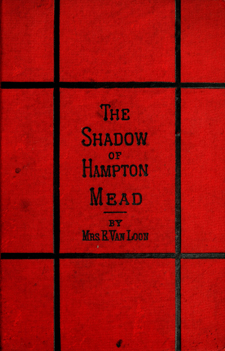 Elizabeth Van Loon, author, apparently was born in Yancey County. That she grew up there is attested by an explicit statement in one of her works, Hampton Mead (p. 140), and from the fact that members of the Bailey family in Yancey remember that she was described by their ancestors as a relative. Whether her family name was Bailey, or Hampton, or some other, cannot be established. Of her education, nothing is known.

She wrote four novels, each published by T. B. Peterson and Brothers of Philadelphia: The Shadow of Hampton Mead (1878), A Heart Twice Won; or, Second Love (1878), Under the Willows; or, The Three Countesses (1879), and The Mystery of Allanwold (1880). The first of these is set in the mountains of North Carolina, apparently in Yancey County, whose geographic features and minor place-names are recognizable to those familiar with the county. The Shadow of Hampton Mead was also published in paperback (from the same type) by Royal Publishing Company of Philadelphia, undated, as The White Slave.

By 1870 she had married Benjamin Franklin Van Loon, and they were residents of Memphis, Tenn. By 1885 they were living in Knoxville, Tenn., where they remained until her death. Van Loon disappears from the records, but Elizabeth was buried in the Van Loon cemetery at the site of Campbellite Church on Middlebrook Pike (Ball Camp), Knoxville. The cemetery is located on land that Van Loon deeded to the church. Their only child, a daughter named Frankie, married Henry Goosie and has numerous descendants in the Knoxville area.