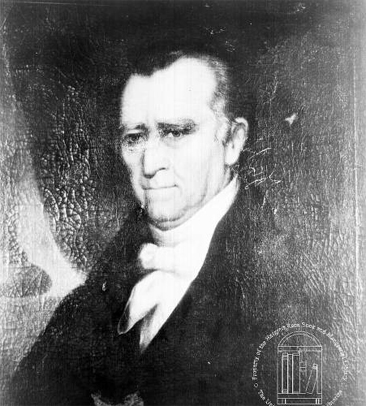 Moses Waddel, educator and Presbyterian minister, the son of William and Sarah Morrow Waddel, was born in a settlement located along the South Yadkin River in Rowan County, an area that became part of Iredell. The Waddels had emigrated from County Down, Ireland, landed in Charles Town, S.C., in early 1767, and from there moved immediately to the South Yadkin region where land was cheap and could be purchased on easy terms.

Moses Waddel appears to have been a frail child, yet this did not deter his parents from sending him, at age six, to a neighborhood school, where he made good progress in reading and writing. In 1778 the Reverend James Hall founded Clio's Nursery as a grammar school, and young Waddel enrolled; his teachers were James McEwen and Francis Cummins, both candidates for the ministry. The invasion of the backcountry by British soldiers caused a suspension of the school in 1780, but when it reopened two years later Waddel was again a pupil. He remained at Clio's Nursery until 1784; his studies included Latin, Greek, arithmetic, geometry, and ethics.

Though only fourteen at the time he left Clio's, Waddel was offered the position of teacher in a school located a short distance from his home. There he instructed seven pupils in Latin and "twenty or more in the ordinary English branches." In 1786 he made a trip to Greene County on the Georgia frontier where for a brief time he was engaged as a teacher, relinquishing the post when threats from the Creek Indians became serious. For the next few years he taught in several other Georgia schools. By 1787 his parents had also moved to Greene County, being convinced that the land offered good opportunities for farming. Religion played a minor part in Waddel's life until he was a young man of nineteen. At that time Presbyterian missionaries who had been sent from North Carolina awakened his interest and led him to unite with the church; a decision to enter the ministry soon followed. In September 1790 Waddel left for Prince Edward County, Va., where he applied for admission to Hampden-Sydney and entered the senior class the following January. He was graduated in September 1791 and the following May received from Hanover Presbytery his license to preach. At his own request Waddel was dismissed from the care of Hanover and received by South Carolina Presbytery, where he served in an interim capacity as minister to the people of James Island, John's Island, Wadmalaw Island, and Dorchester. In April 1794 he accepted the call to a charge in Georgia, identified only as Carmel Church, and there was ordained as a Presbyterian minister. The Reverend Francis Cummins, one of his first teachers, preached the ordination sermon.

But Waddel could not long resist the classroom, for soon he had organized a school outside the village of Appling in Columbia County. In 1801 he moved to Vienna, across the Savannah River in Abbeville District, S.C., where he opened a school and continued his preaching ministry. Three years later he moved the school to Willington, about six miles away, and there began an academy for boys that became one of the better-known institutions of the antebellum South. Its location was on a high ridge near the river, in a community that had been settled by Scots-Irish and Huguenots. The first building was a two-room log structure that was soon replaced by one with four classrooms and a chapel. Students obtained board and lodging in the homes of nearby residents and studied in small brick or log huts clustered around the main building. The curriculum was heavily weighted in favor of the classics, and the quality of instruction resulted in a remarkable number of graduates who, for their day, were well educated. Estimates of enrollment ranged from 180 to 250 students per year, with the total number of students coming under Waddel's influence at Willington being perhaps as many as 4,000.

Willington Academy is also remembered for its system of student government. Monitors, who were apparently not regarded as detectives, were appointed to supervise the various classes, and each Monday morning these monitors brought cases of rules infractions before a jury of five students. The student court was presided over by a teacher, with Waddel holding the position of final arbiter. The list of students who were enrolled at Willington is noteworthy. Among the names are William H. Crawford, a pupil in the Appling school and an assistant at Willington; John C. Calhoun, A. B. Longstreet, George McDuffie, and Patrick Noble, all governors of South Carolina; Henry W. Collier, governor of Alabama; George R. Gilmer and Thomas W. Cobb, governors of Georgia; and Hugh Swinton Legaré, James L. Pettigru, and Andrew Pickens Butler, U.S. senators. Good descriptions of the school and of Waddel appear in the second volume of David Ramsay's History of South Carolina (1809) and in A. B. Longstreet's Master William Mitten (1864). Few credit Waddel with great scholarship but instead find the secret of his success in complete mastery of the subject being taught, his impartiality in dealing with students, his insight into the character of youth, and, to a remarkable degree, his ability to stimulate the desire to learn.

In 1818 Waddel was elected president of the University of Georgia. The position was not one he sought, and he accepted it with reluctance. In May 1819 he and his family arrived in Athens, where he remained until retiring in 1829. His administration was marked by a greatly improved financial position for the university and a substantial increase in student enrollment.

On leaving Athens Waddel returned to Willington, where he owned a plantation and a home that had been recently built. Planting operations were left largely in the hands of an overseer, with much of Waddel's time being given to preaching. He enjoyed the association with other ministers and the opportunity it afforded him to visit the districts adjacent to Abbeville.

Waddel was twice married; in 1795 to Catherine Calhoun and in 1800 to Eliza Woodson Pleasants. Catherine Waddel, the only daughter of Patrick Calhoun and the sister of John C. Calhoun, lived for only a year after their marriage. The second Mrs. Waddel, whose name also appears as Elizabeth, was a Virginia native who had been a friend in earlier years. Eliza and Moses Waddel were the parents of six children who survived them—James Pleasants, Isaac Watts, William Woodson, Sarah Elizabeth, Mary Anna, and John Newton.

Moses Waddel continued to reside in Willington after the death of his wife in 1830. In September 1836, shortly after returning from a preaching mission, he suffered a severe paralytic stroke and in 1839 was moved to the home of his oldest son, James, who was then living in Athens. It was there that he died.

A. B. Longstreet described Waddel as being approximately five feet nine inches tall, "of stout muscular frame and a little inclined to corpulency," with a large head and a mass of dark hair. The surname was pronounced with the accent clearly on the first syllable, making it rhyme with model.

Robert P. Brooks, The University of Georgia under Sixteen Administrations (1956).