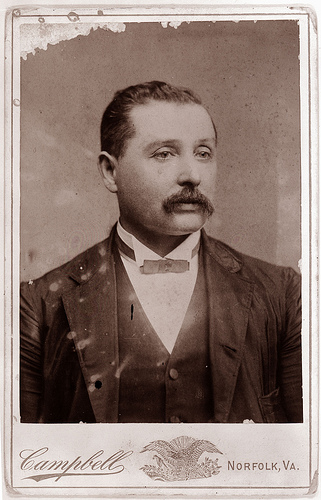 Henry Weil, merchant, was born in Oberdorf, Würtemberg, Germany, the fourth child and second son of Jacob Weil (d. 1886), an antique dealer, and his Bavarian-born wife Yetta (d. 1889). Henry and his older sisters and brothers attended public schools first in Oberdorf and then in nearby Bopfingen, where they studied English and French. In April 1860 Henry emigrated to the United States.

Herman (1842–8 Dec. 1878), Henry's older brother, had left Germany in 1858, first joining his two older sisters in Baltimore and then moving to Goldsboro to work as a clerk in Oettinger's general store. On 28 June 1861 he enlisted in Captain J. B. Whitaker's company of the Goldsboro volunteers that later became Company D of the Fourth North Carolina Infantry Regiment, Confederate army. Returning to Goldsboro soon after Appomattox and just two months after Sherman's army had billeted briefly in Goldsboro, Herman was joined by Henry. The two brothers opened H. Weil & Bros. on 21 June 1865, inscribing in their first ledger the words "Mit Gott!" The original general store was a small frame building on a half-acre lot purchased for $1,050 and located in the center of town, opposite the juncture of two railroads. The following year a younger brother Solomon arrived to become part of the firm, which expanded rapidly into a major mercantile establishment in the state, reaching a million-dollar annual sales record by 1900. Herman died of cerebrospinal meningitis at age thirty-six but had lived to see his business well established and the original building replaced in 1870 by a two-story brick structure adorned with cast-iron fluted columns.

Henry Weil, besides his active participation in the varied interests of H. Weil & Bros., which included cotton, real estate, a brickyard, coal, and ice, was, together with his brother Solomon, incorporator of the major town business firms inaugurated between 1880 and 1900: the Goldsboro Oil Company, Pioneer Tobacco Company, Wayne Agricultural works, Goldsboro Savings Bank, and Goldsboro Storage and Warehouse Company. One of the founders of the Bank of Wayne, Henry remained a director until his death.

Renowned for his absentmindedness regarding domestic and personal details and his good-humored recognition of his lapses, Henry Weil was imaginative in venturing into new areas of investment. His Carolina Rice Mills experimented briefly with the production of Carolina Rice Flakes at the turn of the century. His dream of a Harnett Railroad, a narrow-gauge track between Dunn and Goldsboro, funded in 1879, remained a blueprint. In 1896 the bid of the Goldsboro syndicate to lease the Goldsboro-Morehead railroad line was turned down, but Henry received a compensatory appointment to the board of directors of the Atlantic and North Carolina Railroad.

A staunch advocate of public education, he served on the board of trustees of the Goldsboro Graded Schools from its establishment until his death—more than thirty years. In 1897 he was appointed to the board of trustees of The University of North Carolina. A lover of books with a fine personal collection in history, religion, and finance, he donated $1,000 in 1899 to The University of North Carolina Library for the purchase of volumes on political and social science.

Weil was among the founders of the Oheb Sholom Congregation in Goldsboro in 1883 and elected director. Although he supported wholeheartedly many Jewish causes, he did not approve of the Zionist movement. In 1910, writing from Palestine, he called it "criminal" to plan "the settling of poor Jews in Palestine on barren soil."

On 24 Mar. 1875, after a two-year engagement, Weil married sixteen-year-old Mina Rosenthal (2 Feb. 1859–18 Oct. 1940), the daughter of Emil Rosenthal, a merchant from nearby Wilson. The young couple moved into the new frame home next door to the house—identical in design and built at the same time—for his brother Solomon and his bride Sarah.

Henry and Mina Weil had four children: Leslie, Gertrude, Herman, and Janet. Weil became ill while returning to Goldsboro from his daughter Janet's graduation from Smith College. He died in the Johns Hopkins Hospital, Baltimore, and was buried in Willow Dale Cemetery, Goldsboro, in the plot purchased by the Oheb Sholom Congregation in 1875.