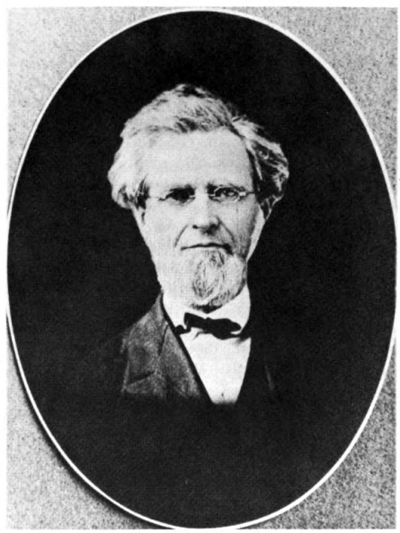 John Brown White, college president and clergyman, was born in Bow, N.H., the son of David and Betsey Carter White. His father was a colonel in the War of 1812. White attended Pembroke Academy and Brown University, where he studied under Dr. Francis Wayland and in 1832 was graduated with B.A. and M.A. degrees. For several years he taught at the New Hampton Institute in New Hampshire.

White studied law and was admitted to the bar in Greenville, Ill., in 1836. He was elected judge of probate in 1837 and appeared to be settled in the legal profession. In 1838 his future wife, the niece of the wife of President Samuel Wait of Wake Forest College, convinced him to accept Dr. Wait's invitation to join the faculty as professor of mathematics and natural philosophy. White also served as secretary, and later as treasurer, of the board of trustees. In 1838, when Wait went into the field as an agent of the college, White was appointed president in his absence. Ten years later, after the resignation of William Hooper as president of Wake Forest, White was chosen as acting president and then president of the college; he served from December 1848 to December 1853. He was licensed to preach by the Wake Forest Baptist Church in January 1839 and ordained in 1849. The college historian said that White, being a New Englander and against slaveholding, became increasingly obnoxious in a slave state as the sectional bitterness increased. He was not a good teacher according to one student and an even worse preacher. The college history also indicates that White was not in total harmony with some members of the board of trustees. His letter of resignation surprised some of the trustees, but he was persuaded to continue until the end of 1853.

He next was president of a girls' seminary in Brownsville, Tenn. (1853–55), before becoming the first president of Almira College (now Greenville College) in Greenville, Ill., in 1855. Except for a short time in 1864–65 when he was chaplain of the 117th Illinois Volunteer Infantry Regiment, White occupied the presidency of Almira until 1878. Afterwards he briefly served as principal of two girls schools in Upper Alton and Champaign, Ill.

White's first wife was Mary Powers Merriam, the daughter of Isaac and Mary Powers Merriam, whom he married on 5 Apr. 1838. The couple had seven children: John Conant, Annie Elizabeth, Emily, Lucy Carter (Merriam), William Henry, Mary Brown, and Juliet Powers. His second wife was Elizabeth Richardson Wright, of Vermont. They were married on 5 Aug. 1857 but had no children. White died and was buried in Greenville, Ill.