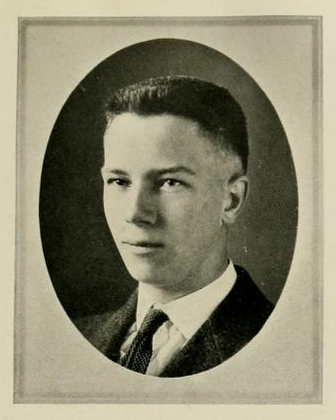 Thomas James Wilson, III, educator and publisher, was born in Chapel Hill, where his father was for many years professor of Latin and Greek, registrar, and dean of admissions at The University of North Carolina. Both his father and his mother, Lorena Franklin Pickard Wilson, were native North Carolinians. Educated in Chapel Hill's public schools and The University of North Carolina, he received an A.B. degree in 1921. Wilson continued his studies while employed as instructor in French, earning an A.M. degree in 1924. He then attended St. John's College, Oxford, as a Rhodes scholar, receiving a D.Phil. in 1927.

Returning to Chapel Hill, he was appointed assistant professor of French, a position he held until 1930. During this period he published a number of scholarly articles on seventeenth-century French literature and translated into English The Correspondence of Romain Roland and Malwida von Meysenburg (1934). In 1930 he turned to commercial publishing and was successively foreign language editor and vice-president of Henry Holt and Company and head of the college department and vice-president of Reynal and Hitchcock. When the United States entered World War II, he volunteered in the navy, where he rose in rank from lieutenant to commander, serving much of the time as hangar deck officer of the aircraft carrier Enterprise, which had a longer battle career than any other fleet carrier in the Pacific.

His war experience turned Wilson away from commercial publishing, and he decided to combine his two developed talents and go into the more scholarly field of nonprofit university press publishing. After slightly more than a year as director of The University of North Carolina Press, he was appointed director of the Harvard University Press in 1947. At that time university press publishing in the United States was in a formative stage. Although the Association of American University Presses had about thirty members, barely a handful could be considered fully professional organizations capable of handling major publishing projects. Indeed, the Harvard University Press, though founded in 1913, had fallen on hard times, so much so that President James B. Conant recommended its dissolution. He was overruled by the Harvard Overseers, whose decision to give the press stronger backing led to Wilson's appointment.

In the twenty years of Wilson's directorship, the Harvard University Press became one of the most distinguished publishing enterprises in the country. Its production of new titles increased from 67 in 1947 to 153 in 1967 and its sales volume from $500,000 annually to over $3 million, with a total backlist of over 2,500 titles. But the figures tell only a small part of the story. Wilson was always insistent that the press's publishing program serve the scholarly and educational aims of the university. While not neglecting the traditional disciplines, he developed strong lines in science and the history of science and in emerging academic fields, such as the many books emanating from the Harvard Russian Research Center and the East Asian Research Center.

With the help of a generous endowment provided under the will of Waldron P. Belknap, augmented by additional benefactions of his mother, the press was able to undertake a number of large publishing endeavors, such as the John Harvard Library of American Classics, the definitive edition of The Poems of Emily Dickinson, and the four-volume Diary and Autobiography of John Adams, initiating the monumental series of Adams Family Papers. Both of the last two works won the coveted Carey-Thomas Award, given annually by Publishers' Weekly for outstanding creative book publishing. Wilson's achievements at Harvard were summed up in the memorial minutes of the Harvard faculty after his death: "He made a greater contribution to scholarship at Harvard during his directorship than any single scholar."

Wilson's two decades at Harvard saw a period of unparalleled growth in university press publishing. The number of presses more than doubled, the number of new titles published tripled, and the dollar volume of sales increased fivefold. University presses became a highly skilled and highly respected part of the general publishing world. In this development Wilson was acknowledged by his fellow directors as their most forceful leader—through both his personal influence and his work for the Association of American University Presses, of which he was president in 1951–53.

Large in stature and of a commanding presence, he had an easygoing geniality that turned into forceful eloquence when important issues were at stake. At a time when increasing competence tempted university presses into a purely commercial approach to publishing, Wilson applied the full force of his energy and persuasive powers to the argument that however important sound business practices and promotional skills were to academic publishing, university presses must serve as tools of scholarship and stand on the solid rock of scholarly editorial decisions. His colleague Herbert S. Bailey, Jr., director of the Princeton University Press, spoke for the great majority of university press directors when he said of Wilson in 1973: "He was, I believe, the most respected member of our profession in the past quarter century."

Wilson's influence was felt well beyond university press circles, however. He was a director of the American Book Publishers' Council (now the Association of American Publishers) and a founding member and board chairman of Franklin Publications (now Franklin Book Programs), a nonprofit organization set up by American book publishers, with foundation and governmental support, for the diffusion of American books through indigenous publication in the developing countries in the Near and Far East. In 1962–64 and again in 1968–69 he served on the U.S. Government Advisory Commission on International Book Programs. For these agencies Wilson made a number of trips to the developing countries of Asia and had a significant impact on publishing in these areas. He was a trustee of the Massachusetts Historical Society and a member of the American Academy of Arts and Sciences. The University of North Carolina (1963) and Harvard (1965) awarded him honorary degrees.

In 1967, faced with mandatory retirement the next year and with the responsibility for a wife and two young children, Wilson decided to return to commercial publishing, and he became vice-president and senior editor of Athenaeum Publishers. He was at the beginning of a vigorous new career when he suffered a fatal heart attack in his New York City home. He was married twice: first, to Dorothy Stearns, by whom he had a son, Thomas J. IV; and second, to Phoebe de Kay Rous Donald, by whom he had a son, Peyton Rous, and a daughter, Chase de Kay.

Mark Carroll, "Some Observations on the Harvard University Press" (MS, files of the Dictionary of North Carolina Biography ).

I had never seen Lambert

I had never seen Lambert Davis's piece until tonight. I love it! I'm going to print it for myself and for TJW III's 4 grandchildren (my kids).