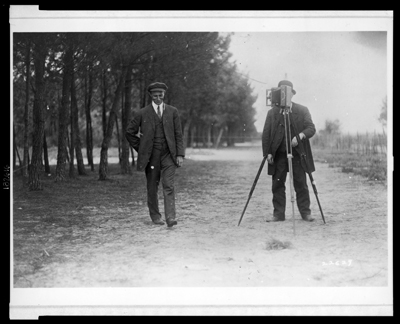 Wilbur Wright, aviation pioneer, the third of five surviving children of Milton and Susan Catherine Koerner Wright, was born at Millville, near New Castle, Ind. His father was a bishop of the United Brethren in Christ Church and editor of the Religious Telescope. Scientific concerns of Wilbur and his younger brother Orville were encouraged by their parents, and their first interest in flying was stimulated by their father's gift of a helicopter type toy designed by the French aviation pioneer Alphonse Penaud. While in high school the brothers started a job printing office and later published a weekly paper, the West Side News.

In the spring of 1893 the Wrights opened a bicycle shop where, in addition to offering the usual bicycle repairs, they manufactured their own bicycles, the Wright Flyer and the Van Cleve. The seasonal nature of the bicycle business allowed time for study, and in 1896 news of the death of the German aeronaut, Gustav Lilienthal, aroused their interest in gliding. They soon obtained the most recent aeronautical data and began experimenting with kites. Their study was encouraged by correspondence with the noted engineer and aviator Octave Chanute beginning in 1900. He frequently informed them about the research of other experimenters and continued to show interest in their work.

Using Lilienthal's air pressure tables the Wrights calculated that a machine with a wing area of a little over 150 square feet would support a man when flown in a wind of 16 miles per hour. In July 1899 the brothers built a model biplane glider with a wing span of 5 feet that Wilbur flew as a kite. The flight demonstrated a major contribution of the Wrights to aeronautics—the system of lateral control by which the wings are warped or presented at different angles to turn the aircraft (the aileron principle). Information received upon inquiry from the U.S. Weather Bureau led the Wrights to select Kitty Hawk as a location where the wind velocity and sand hills, free of trees or shrubs, would allow them to fly a man-carrying glider. Correspondence with Joseph J. Dosher of the Kitty Hawk weather station and William J. Tate, the former postmaster, confirmed their decision, and on 12 September 1900 Wilbur disembarked from the decrepit flatbottomed schooner that had brought him to Kitty Hawk from Elizabeth City, the nearest railroad point to his destination. Orville arrived at the camp on 28 September. In the tests of their machine flown as a kite, and then with a man on board, the Wrights were pleased with the system of lateral control but disappointed with the machine's lifting ability.

In July 1901 the brothers returned to Kitty Hawk, where with a large machine they made several hundred flights ranging from 50 to 400 feet in length. These flights confirmed their suspicion, based on experiments during 1900–1901, that Lilienthal's tables and the current theories regarding air pressure were incorrect. The brothers also realized that the center of pressure on the wings moved backwards as the angle of incidence was decreased—in direct opposition to accepted theory. 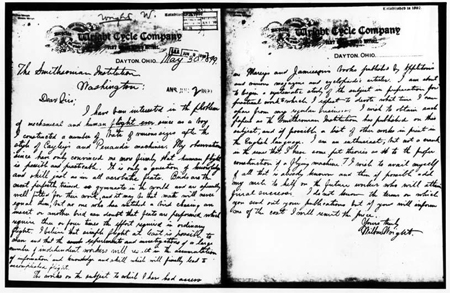 The machine that the Wrights began assembling at Kitty Hawk in August 1902 incorporated changes based on their own air pressure tables and wind tunnel experiments. The glides made in September and October confirmed the Wrights' theories regarding air pressure and demonstrated the efficiency of their control system. The basic Wright patent filed in March 1903 incorporated the plans of the 1902 glider. The patent was granted on 22 May 1906.

On their return from Kitty Hawk in 1902, the Wrights began building a larger machine powered by a 12-horsepower motor of their own construction that drove two propellers of their own design. The Wrights returned to Kitty Hawk on 25 September 1903, but due to a succession of bad storms the first successful flight was not made until 17 December. The machine was launched from a truck on a monorail track on level ground entirely through the power of the motor and the thrust of the propellers. Orville made man's first machine-powered flight, which lasted about 12 seconds and covered a distance of 100 feet. The fourth and last flight of the day made by Wilbur covered 852 feet in 59 seconds.

During the next two years the Wrights built two heavier and stronger airplanes, improving their design and increasing the reliability and range of flight. Both were tested at Dayton, where on 5 October 1905 they made a circular flight of 24 miles.

On 8 February 1908 they received a contract from the U.S. Army Signal Corps to build a machine capable of flying 40 miles per hour for 10 miles carrying a pilot and a passenger. Three weeks later they contracted with a French syndicate to manufacture the airplane in France. They redesigned their machine to permit the pilot and passenger to sit upright and in May 1908 returned to Kitty Hawk to practice for demonstrations at Fort Myer, Va., and in France. Immediately after the Kitty Hawk trials Wilbur went to France, where his demonstrations at the race course at Humandrieres near Le Mans created a sensation. After his return he made spectacular demonstration flights as part of the Hudson Fulton Celebration: on 29 September from Governors Island around the Statue of Liberty and on 4 October from Governors Island 21 miles up the Hudson to Grant's Tomb and back.

After the successful trials at Kitty Hawk in 1908, Orville demonstrated the contract machine at Fort Myer. However, an accident on 17 September in which his passenger, army lieutenant Thomas E. Selfridge, lost his life delayed completion of the tests until July 1909. Orville then went to Germany and formed a German Wright Company.

In 1909 the American Wright Company was incorporated with Wilbur as president. The Wrights were to receive stock and cash and a 10 percent royalty on all airplanes sold. The company was profitable from the start, with the largest source of income from expedition flights.

Barbara Craig, The Wright Brothers and Their Development of the Airplane (1967).

Orville Wright, How We Invented the Airplane (1953).