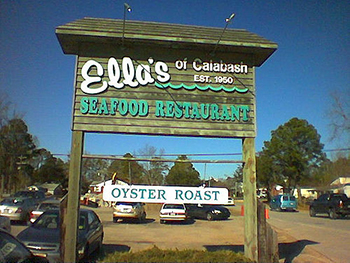 Calabash is a fishing and resort town situated on the Calabash River in southwestern Brunswick County. Dubbed the "Seafood Capital of the World" by a food editor of the New York Times, the small town can boast of more seafood restaurants than any place of its size in the United States. Settled in the early 1700s, the site now occupied by Calabash evolved into a village known as Pea Landing, named for the peanut crops brought to the river for shipment by area planters. In 1873, the name was changed to Calabash for the drinking gourds that hung at wells in the area.

The first of the restaurants that have brought the town international fame opened in the early 1940s, featuring lightly battered and deep fried shrimp, oysters, flounder, and other seafood. Over the ensuing half century, some two dozen other restaurants have been built, serving seafood dinners to more than 1.25 million patrons each year. The special method of seafood preparation in the town has become popular in other parts of the United States, and the town has thus lent its name to "Calabash-style" seafood.

Local tradition holds that legendary entertainer Jimmy Durante made reference to the town each time he closed his radio and television shows with the famous line, "Goodnight, Mrs. Calabash, wherever you are." Durante dined often at a Calabash restaurant in the 1940s. Since its incorporation in 1973, Calabash has undergone significant commercial and resort development.