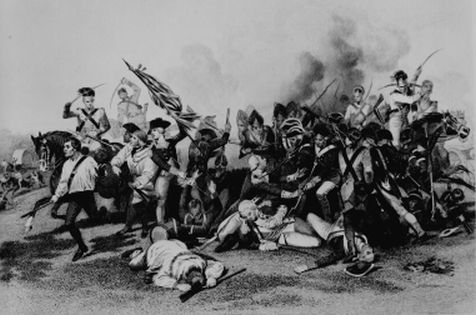 In April 1780, at the height of the Revolutionary War, Gen. George Washington ordered Gen. Johann de Kalb to march the Maryland and Delaware Continentals from their encampment in Morristown, N.J., to Charleston (then Charles Towne), S.C. The British army had besieged the city and, unless American reinforcements arrived, it would soon fall. When de Kalb arrived in Hillsborough on 22 June, he learned that Charleston had fallen on 12 May. De Kalb's troops became the only force of Continentals in the South.

After remaining in North Carolina for a time, de Kalb was replaced by Gen. Horatio Gates in June 1780. The Continental Congress opted for Gates to command the force because de Kalb was a foreigner and was unlikely to win local support; moreover, Gates had won a stupendous victory at Saratoga, N.Y., in 1777. On assuming command, Gates examined a letter addressed to de Kalb from Thomas Sumter, South Carolina's upstate partisan leader. Sumter's message detailed the scattered postings of British forces in South Carolina, listing the strength of their garrison at Camden at 700. On this information, Gates decided to take Camden.

Moving south with his men through the intense summer heat, Gates received a major boost when Maj. Gen. Richard Caswell and the North Carolina militia of more than 2,000 men joined his troops at Rugeley's Mill on 6 August, boosting Gates's complement to more than 3,000. The British soon learned of Gates's advance, and Lord Rawdon, commander of the Camden garrison, notified Lord Charles Cornwallis in Charleston. Cornwallis decided to fight for the town for several reasons. Camden contained military storehouses and industry vital to the British war effort in the South. Additionally, Cornwallis would have had to abandon several hundred sick and wounded soldiers to Gates if he relinquished Camden. Finally, a British retreat from Camden could begin the deterioration of royal hegemony in South Carolina and Georgia that had taken over a year to reclaim, as well as delay a subsequent British advance into North Carolina. Cornwallis rushed reinforcements to Camden, boosting his strength to 2,300, and waited for Gates.

At dawn, Gates ordered the Virginia militia to advance against the British infantry. When the militiamen faltered, Cornwallis ordered his regulars to attack. Both the Virginia and North Carolina militia fled. Gates expected too much from his militia, and shortly after the battle began his left wing had evaporated. The British infantry then wheeled left and attacked the Continentals. The Continentals, along with Col. Henry Dixon's North Carolina militia regiment, defended their position gallantly, but they were forced to retreat with heavy losses. General de Kalb was killed in the battle, and Gen. Griffith Rutherford was captured. The bulk of the militia, along with Gates, raced back to North Carolina, and 700 Continentals reformed at Hillsborough. British forces remained in control of South Carolina, ready to advance into North Carolina. Combined with victories at Savannah, Ga., and Charleston, S.C., the British had squelched most organized resistance in the Carolinas and marked the nadir for the American cause in the South.

Peter Lumpkin, From Savannah to Yorktown: The American Revolution in the South (1981).