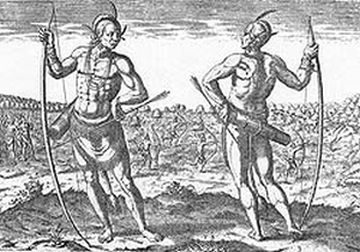 Chowanoac Indians were a tribe of Indians of the Algonquian language group living along both banks of the present-day Chowan River in northeastern North Carolina at the time of European settlement in the sixteenth and seventeenth centuries. The name is said to be Carolina Algonquian for "people at the south," possibly indicating some migration on their part just prior to contact with Europeans. Their tribal lands encompassed much of modern Gates, Hertford, Bertie, and Chowan Counties. Their villages, farms, and fisheries were bounded by their Iroquoian Mangoak (later Tuscarora) neighbors south and west of Salmon Creek in Bertie County, their Algonquian Weapemeoc neighbors east of Rockyhock Creek in Chowan County, and their Algonquian Nansemond and Iroquoian Nottoway, Meherrin, and Wyanoke neighbors north of the convergence of the Meherrin and Blackwater Rivers on the present North Carolina-Virginia border. The swampy lowlands of these watercourses were shared "hunting quarters" for these various groups of Woodland Indians. At the time of Sir Walter Raleigh's colonization efforts from 1584 to 1590, the Chowanoac were probably the most powerful of the Carolina Algonquians.

By 1666 the Chowanoac were beginning to respond to English encroachment into their lands. Violence broke out that year, with losses to the settlers on the west side of the Chowan River. Peace was once again established, leading to the Chowanoac's essentially abandoning their lands west of the river to rapid English settlement. The Chowanoac were apparently involved to some degree in the warfare that ignited Bacon's Rebellion in Virginia in 1676, but they were "wholly subdued" in late 1677. Numbering perhaps less than 200, the Chowanoac were placed on a reservation of 12 square miles in modern Gates County. They, like other coastal Indians, began to live among the English, but they continued to suffer from the encroachment of the colonials. They were amenable to the teachings of Christian missionaries, notably the Quaker George Fox.

By the time of the Tuscarora War of 1711-13, the once mighty Chowanoac could muster only 15 fighting men to go on expeditions to fight with the English against their historic Iroquoian neighbors to the west. During the period they suffered both at the hands of their enemy and their English allies. Chowanoac Chief John Hoyter petitioned the colonial government for protection, only to have the tribe lose some of its best land when the reservation was reduced to six square miles. By 1734 the Chowanoac were too few to farm even this land, and a petition signed by four tribal leaders asked the colonial government for permission to sell some 2,050 acres. They continued to sell land over the next two decades and ceased to exist as a functioning tribe around 1751.

"An engraving of a Virginia Chief by Theodor de Bry, based on an illustration by John White. de Bry Europeanized White's original drawings--White had seen the Algonquians in person on the Roanoke voyages promoted by Sir Walter Raleigh. Engraving reproduced courtesy of the Library of Congress." Courtesy of Documenting the American South, UNC. Available from https://www.nps.gov/nr/travel/jamesriver/colonization.HTM (accessed May 23, 2012).

COULD YOU PLEASE GIVE ME MORE

COULD YOU PLEASE GIVE ME MORE INFORMATION ON THE MARRIAGE BOND BETWEEN REUBIN MILLER AND LEVINIA COFFIELD, 21, SEPTEMBER, 1848 IN CHOWAN COUNTY, NORTH CAROLINA?

I just got my DNA test back,

I just got my DNA test back, to find out that I am 1/16 the Chowanoke. This is paternal, also how do I get more information on this tribe and find out who I am related to.
Thank you

Can you tell me what DNA test

Can you tell me what DNA test you took the show tour American Indian bloodline? Thank you

I am forwarding your query to our Reference services who can assist you: http://statelibrary.ncdcr.gov/contact.html

I am a decent of Tabitha

I am 1.9% Native, my line is also Tabitha and John Freeman, Thomas Hoyter, Chief Chowonaoc Indian is my 8th GG.

I am too, on my Maternal side

Tabitha Hoyter shows up as my

Tabitha Hoyter shows up as my great grandmother 7 generations ago. Just discovered that today. Had no idea about this. On my other side, the chiefs of the Montauks of Long Island show up 8 generations back. Something I found out only a couple of weeks ago. Something else of which I also knew nothing.