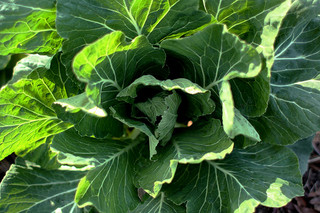 Collards, also called collard greens or simply "greens," grow throughout the South and probably as much as any food delineate the culinary boundaries of the Mason-Dixon Line. Sometimes defined as headless cabbages, collards are best when picked and prepared just after the first frost, although they are eaten year-round. Although collards are grown throughout the South and Southwest (one Indian word for them means "qualities"), they are most prevalent in the Deep South and the eastern plains of North Carolina and South Carolina. The exporting of fresh collards to displaced southerners in the Northeast is big business for several farms in Duplin and Sampson Counties, where over 1,700 acres of greens are harvested twice a year. Because they look fresher, all the collards shipped north and most sold commercially in North Carolina are hybrids, which are a deeper green than the tastier cabbage-like greens that have a slight yellow coloring.

The traditional preparation of collards follows a simple recipe. First, they are "crapped" (cut at the base of a stalk), then "looked" (searched for worms), then cooked on a low boil until tender, usually with fatback, neck, or backbone added. The resultant "mess o' greens," topped with a generous helping of vinegar, can easily make a meal in itself. Pot liquor, or "likker," the juice left in the pot after the greens are gone, is a southern version of nectar from the gods and is valued both as a delicacy-particularly when sopped with cornbread-and for its alleged powers as an aphrodisiac.

Southern childhood memories often include images of collard greens, perhaps the jarring first whiff of the unmistakable odor for which greens are renowned, or, more likely, the pleasant, loving connection of grandma's iron pot and steaming pot liquor. Particularly among rural and poor southerners, collard greens have endured as a dietary staple. Some southerners claim collards kept Union general William T. Sherman's scorched-earth policy from totally starving the South into submission; many North Carolina families in the early 2000s are living testament to surviving Great Depression winters with greens, fatback, and cornbread.

Collards are usually grown for culinary purposes, but southerners have been known to decorate a particularly brilliant plant as a Christmas tree. Thelonious Monk, the great jazz musician from Rocky Mount, wore a collard leaf in his lapel while playing New York City club dates. Collards were first officially celebrated in 1950, when playwright Paul Green led a "Collards and Culture" symposium in Dunn and other North Carolina cities.