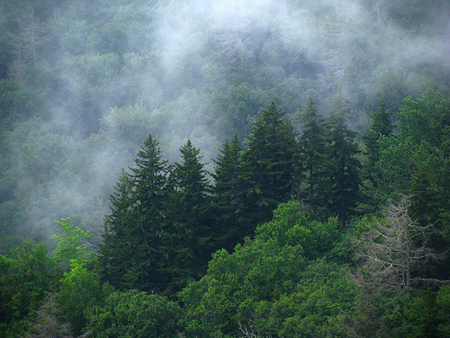 The 1960s marked the beginning of a new focus on the environment in North Carolina and throughout the United States. Residents of the state became more concerned with preserving land for ethical reasons and for the sheer aesthetics of scenic areas. In 1966 the National Park Service conducted in North Carolina and Tennessee the first public hearings on wilderness designation for the national parks. A park service plan called for the construction of a transmountain road through the Great Smoky Mountains National Park and served as a test to see if wilderness designation could include development. More than 300 residents spoke in opposition to the road, and the park service received thousands of letters during the public hearings.

In 1960 the State Board of Health issued a report that blamed air pollution for causing damage to health, property, and animals in one-third of North Carolina's counties. By 1963 state and federal health authorities were conducting studies of air. However, the state allotted no money for air pollution improvement, instead offering assistance to local governments. A few private land trusts-nonprofit, public-interest charities created for local and regional land conservation-were established in North Carolina in the 1960s by visionary conservationists, most notably the Eno River Association by Margaret Nygard and the Southern Appalachian Highlands Conservancy by Stan Murray.

Public concerns and political initiatives regarding environmental protection blossomed nationwide in the early 1970s. Until that time, most of the state's publicly protected natural lands were owned and managed as units of the national forests, national parks, or national wildlife refuges, along with a scattering of state parks and wildlife game lands. Less than 5 percent of the state's total of nearly 34 million acres was in public ownership. In North Carolina an "Environmental Bill of Rights" was adopted by public referendum as Article 18 of the State Constitution, and the legislature enacted several landmark public policies, most notably the State Environmental Policy Act and Coastal Area Management Act.

The first state regulations on air pollution went into effect on 1 July 1970. From 1972 to 1976, there were major additions and creations of new units of the state parks system, including acquisition of small nature preserves. The next few years saw the establishment of several modestly funded state programs in separate agencies for the inventory and protection of unique natural areas and endangered species: the Natural Heritage Program, the Plant Conservation Program, and the Nongame and Endangered Wildlife Program. Most environmental protection programs were administered by what is today called the Department of Environment and Natural Resources. In the 1980s the state legislature enacted a few statutory programs that promoted natural resource conservation-including the Nature Preserves Act, the nation's first state income tax credits for gifts of land for conservation purposes, and improvements in air and water pollution control programs. Generally, however, the governmental responses to environmental threats were small-scale and reactive.

The state field office of the Nature Conservancy opened in 1976, and over the next 25 years it acted on recommendations of the North Carolina Natural Heritage Program to acquire and protect more than 750,000 acres of natural habitats. Acquisitions in the 1980s by the Nature Conservancy and the Conservation Fund of huge areas of wetlands and formerly converted "superfarms" established new wildlife refuges nearly a half-million acres in size located on the peninsula along the Albemarle-Pamlico estuary. Other preserves were established by universities and local conservation groups.