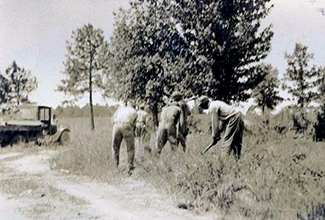 Convict labor and convict leasing, the practice of using convicts for work in the public or private sector, was common throughout the South after the Civil War. Its history in North Carolina was complicated by the state's confusing prison system, a patchwork of penitentiaries and work camps whose supervision was constantly in dispute between county and state officials. Unlike some states, North Carolina built a state penitentiary in 1870, and the great majority of its prison labor-an average of 65 percent between 1870 and 1890-was absorbed by construction of the Western North Carolina Railroad, a state-owned enterprise. Indeed, North Carolina's nineteenth-century rail network was largely an achievement of convict labor. These prisoners endured terrible conditions, usually living in filthy railroad cars that had been converted into rolling jailhouses by the addition of bunks, a kitchen stove, and iron rings to accommodate the convicts' chains.

By the late 1800s, when the construction phase of railroad development had concluded, two other industries began to compete for convict labor: road building and farming. In 1887 the legislature authorized counties to establish chain gangs at their own discretion. Equally significant was the state's purchase or lease of extensive farmland in the 1890s. By 1898, 90 percent of the state's prisoners (that is, virtually all able-bodied men) farmed over 8,000 acres. The largest farm, the 4,100-acre Caledonia, bought in 1893 for $67,000, yielded the state $1,000 a week in profits by the mid-1920s.

The state of North Carolina and its counties competed fiercely for custody of sentenced felons, and soon the state opened its own chain gang camps. Because of this unique state-county tug-of-war that masqueraded as prison management, the state did not secure responsibility for all convict operations until 1933. After that, the state simply took over existing county highway camps, and the prison system itself was placed under the jurisdiction of the State Highway Commission.