After the Civil War, which virtually halted construction, the state in 1866 subscribed $4 million to the Western North Carolina Railroad to continue the project. John A. 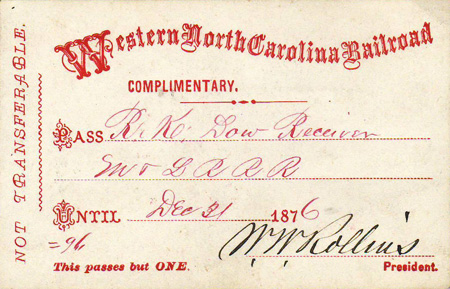 Hunt finished the rest of Charles F. Fisher's work east of Morganton, and plans were made for completion of the next section from Morganton to Old Fort. With no ready cash on hand, the railroad's president and stockholders were eager for governmental aid. The state constitutional convention of 1868 and the Republican State Convention authorized the issuance of bonds totaling $6.4 million to extend the road from Morganton to Asheville. In the same year George W. Swepson and Gen. Milton S. Littlefield secured absolute control of the Western North Carolina Railroad by purchasing 2,000 of the 3,080 bonds issued.

The railroad then became a victim of Swepson and Littlefield's corruption. During the administration of Governor William W. Holden, the two men issued worthless securities, participated in fraudulent stock subscriptions, and built a huge debt. The road was pillaged, Littlefield and his cronies fled the state, and Holden was impeached.

Western North Carolina Railroad Company. Annual Proceedings of the Western No. Ca. Rail-Road with Reports of Officers for 1869. Statesville, N.C.: Drake and Son. 1869.