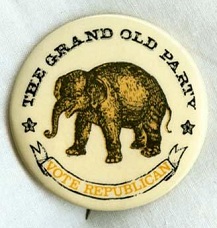 The Republican Party in North Carolina has progressed through several discrete periods of strength and weakness to become a prominent political organization in the state, on a nearly equal competitive footing with the long-dominant Democratic Party. Shortly after President George Washington's inauguration in April 1789, a two-party national political system began to take shape. Secretary of the Treasury Alexander Hamilton led the Federalists, who believed that the U.S. Constitution should be loosely interpreted and advocated a strong national government in the hands of a "rich and well-born" minority. Hamiltonians also pushed for a large peacetime army and navy as well as a stable financial system, and they tended to favor the interests of commerce and manufacturing over agriculture.

Secretary of State Thomas Jefferson led the Republicans, or Anti-Federalists, who preferred (as most modern Republicans still do) a stricter interpretation of the Constitution by which powers not delegated to the central government were reserved for the states. Despite the fact that North Carolina was predominantly a state of small farmers (a source of Republican strength in the South), most members of its congressional delegation between 1789 and 1793 were Federalists, although they were reluctant to support such Hamiltonian policies as tariffs and the national bank.

For the remainder of the eighteenth century, most of the state's governors were Jeffersonian Republicans, and after 1792 the party dominated the legislature. Under the leadership of Willie Jones of Halifax and, later, Nathaniel Macon of Warren County, the state became a bulwark of Republicanism. As the Federalists weakened after 1800, disappearing as an organized party by 1815, Republican state leaders and local patrons developed a strong political machine in North Carolina. The contentious presidential campaign of 1828, however, split the national Republican Party (or the Democratic-Republican Party, as it was called then) into several groups. Andrew Jackson emerged as the candidate of one of these groups, whose supporters would come to be known as Democrats.

In 1854 a new national Republican Party was organized in opposition to the ruling Democrats. Not until after the Civil War (1867) was its North Carolina counterpart formally launched, supported by the loyalty of three main groups: resettled northerners (derisively known as "carpetbaggers"); blacks, logically attracted to the party of Abraham Lincoln, which had given them their freedom and the right to vote; and native whites (or "scalawags"), who had grown tired of life under the planter class. Former Democrat William W. Holden, editor-publisher of the influential North Carolina Standard from 1842 to 1868 and provisional governor in 1865, became the Republican Party's chief advocate.

With Holden reelected governor and a large legislative majority, the Republican Party held power from 1868 to 1870. Its positive contributions-support of public education and extension of the right to vote by adopting the Fifteenth Amendment of the U.S. Constitution-were offset by tax and debt increases and irregularities in the sale of legislatively authorized railroad bonds. In the election of 1870, North Carolina's conservative Democrats regained control of the legislature, although the state continued to elect Republican governors (Tod R. Caldwell in 1870 and Curtis H. Brogden in 1874). The Democrats then won a resounding victory in 1876, taking control of the governor's office, the legislature, and most of the congressional seats. Not until 1896, when the Populists and Republicans joined together in political "Fusion," was a Republican again elected governor; Fusionists also took over the legislature and the judiciary. However, the return to power was short lived. In 1898 the Democrats unleashed a fierce white supremacy campaign, underscored with violence, that ended Republican-Populist rule. Two years later, Democrats further solidified their power through the disfranchisement of African Americans and other measures, ushering in a long and troubled era of segregation. 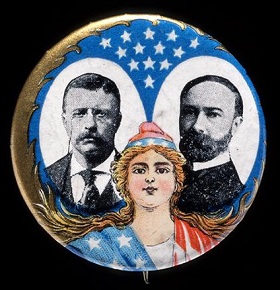 Cracks in the Democratic one-party domination of twentieth-century North Carolina politics did not appear again until the 1920s, when some Republicans began to portray themselves successfully as the "lily-white" party. Republicans carried the state in the 1928 presidential election, as many Democrats opposed Al Smith's candidacy, which they dubbed "rum and Romanism" in reference to his anti-Prohibition views and Catholic faith. That year Charles A. Jonas became the first Republican elected to Congress from North Carolina (his son Charles R. Jonas became the second Republican congressman in 1952 and was reelected to nine successive terms). Dwight D. Eisenhower's popularity in the state in his 1952 and 1956 presidential runs were further examples of Republican success during this era.

After 1960 an ideological battle began to take shape that polarized Democrats and Republicans even further, both within the state and nationally. GOP candidates generally came to oppose many liberal causes that occupied the national Democratic Party. Issues of race became a central factor in how North Carolinians voted. Increasing Democratic support of federally mandated integration and civil rights laws-as well as feminism, abortion rights, gay rights, government entitlements, the antiwar movement, and other liberal causes-alienated the party from many southerners and opened the door for the election of more conservative, "traditional" Republicans. Richard M. Nixon's 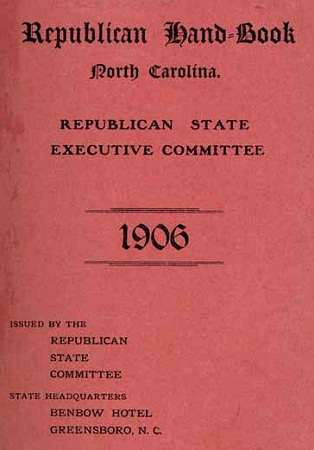 Although the Republican presence in the North Carolina General Assembly was severely diminished in the wake of the Watergate scandal of 1974, Republicans continued to make political gains with the election of James G. Martin to two terms as governor in 1984 and 1988, as well as a steady increase in the number of Republican-controlled local offices. In the 1980s the rise of the Christian Right-evangelical conservative Christians organized in a political coalition to fight against what they perceived as the "godless" ideologies of the liberals-swept through North Carolina and the South, leading to further GOP gains. Political Action Committees, such as the ardently conservative, Helms-controlled Congressional Club, gained in status and potency. After the 1962 election, the state's U.S. House representatives included 2 Republicans and 9 Democrats; by 1984, 5 of 11 North Carolina congressmen were Republicans, with the split remaining more or less equal in the years following. While Republican rolls increased from 541,916 in 1972 to more than 1.6 million by 2000, many registered Democrats voted for GOP candidates, particularly for national seats. Republican presidential candidates handily carried North Carolina and much of the South in every election between 1968 and 2004, except for the post-Watergate election in 1976 of southerner Jimmy Carter.

In 1994 Republicans took control of the North Carolina General Assembly as part of a GOP national landslide that also resulted in Republican control of the U.S. Senate. Since that year, although the 1996 and 1998 elections saw the scales tip back in favor of the Democrats, the state has seen more-or-less equal competition between partisans of both parties. By the early 2000s, the Republican Party in North Carolina continued to maintain a strong presence in a state so thoroughly Democratic for much of its history. After several tenures of Democratic governors in NC, Pat McCrory was elected Republican governor of North Carolina in 2013, after a previous failed attempt in 2008. He served only one term. However, GOP rolls have increased further through Republican growth in the suburbs of the state's largest cities and the continued influx of conservative retirees and professionals. While actually sharing a number of socially and fiscally conservative policies with many North Carolina Democrats, the state's Republicans were seen as the strongest conservative voice in local and national elections, touting the benefits of a healthy business environment, strong national defense in the face of terrorist and other threats, limited governmental regulation, traditional social values, and other views.

Earl Black and Merle Black, The Rise of Southern Republicans (2002).