Fusion of Republicans and Populists

Between 1894 and 1900 the North Carolina Republican and Populist Parties cooperated in state elections and in state government. That cooperation was labeled "Fusion" by its Democratic opponents, although Republicans and Populists maintained separate organizations and did not describe their actions as fusion. In the middle and late 1890s Republican-Populist cooperation resulted in newly configured delegations from North Carolina to the U.S. Congress, Populist-Republican control of the General Assembly, Republicans and Populists in state executive offices, and a non-Democratic state supreme court. A significant number of cooperationist officeholders were black. Fusion produced the only departure from Democratic Party hegemony after Reconstruction.

The origin of the so-called Fusion was the rise of the People's Party, or Populist Party, after years of economic depression and hardship had motivated small farmers, who suffered the most, to take political action. They formed the Farmers' Alliance, a national organization whose members subsequently became the central component of the Populist Party. North Carolinian Leonidas L. Polk was a primary leader of the Farmers' Alliance in the state, voicing its concerns in his publication, the Progressive Farmer, until his sudden death in 1892. During the 1892 election, many Republicans urged cooperation with Populists. Although cooperation as a statewide strategy was eventually rejected, some Republicans and Populists agreed to support joint local candidates. In 1892 the Populist Party attracted roughly 17 percent of North Carolina voters. This was disappointing to the third party, but support for the Democrats fell below 50 percent of the electorate.

There were tensions in the proposed relationship. The organizations disagreed on a wide range of issues, particularly those affecting national economic policy. Populists favored paper currency, government control of money volume, and a federally sponsored system of rural credit. Republicans tended to support a gold standard, a revenue system that discriminated against farmers, and the existing private national banks. Further, Populists were decidedly antirailroad, whereas Republicans supported modest government regulation of railroad rates. Moreover, there were deep cultural differences between the parties' rank and file. Populism was overwhelmingly a coalition of white commercial farmers of modest means from the east and the Piedmont. Republicans were primarily white Mountain anti-Confederates and eastern black North Carolinians with a sprinkling of high-tariff manufacturers and urban professionals.

Nonetheless, in 1894 the parties agreed on the need to eliminate laws giving Democrats control of the election process. Both parties were convinced that the election system was fundamentally unfair. Democratic supervision of elections resulted in a range of fraudulent practices, from ballot box stuffing to false counting of votes. The weakness of local government was also a reason for Populist-Republican unity. 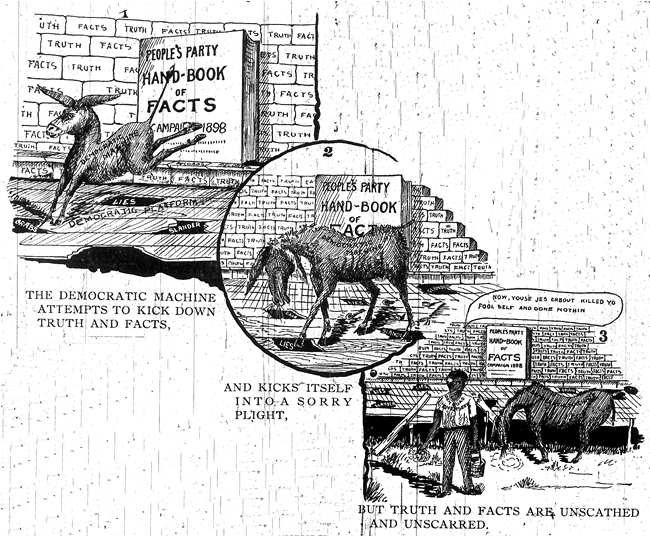 With these issues in the forefront, Populists and Republicans in 1894 ran a surprisingly harmonious and spectacularly successful campaign. Their state conventions endorsed the coalition strategy and agreed on who would represent the parties in the few statewide races in contention. Republican and Populist conventions at the county and congressional levels set aside their differences and joined forces against Democrats. The precise methods for local cooperation differed. Sometimes the two parties chose candidates jointly; sometimes they agreed to support the candidate nominated by one of the parties. The results were revolutionary, as the Populists and Republicans won control of the North Carolina Supreme Court, the General Assembly, and most of the state's seats in Congress.

The Republican-Populist General Assembly of 1895 liberalized access to the ballot (especially for black voters), decentralized local government, increased taxes for education, and reduced the legal rate of interest on certain contracts to 6 percent per year. The legislature also sent a Populist, Marion Butler, and a Republican, Jeter Pritchard, to the U.S. Senate.

Despite this initial success, Fusion rule was immediately subjected to intense pressures, most of them related to the substantive differences between the parties and the impending presidential election of 1896. That year, Republican Daniel L. Russell Jr. was elected North Carolina governor with Fusionist support. During his administration the Fusionists began a variety of progressive programs emphasizing public educational reform and enhancement. But divisions soon arose among the factions of Republicans and Populists, accentuating their differences and putting the long-term viability of Fusion in jeopardy. Some Populists, including Butler, wanted to change the direction and scope of cooperation to advance financial reform, in particular the free and unlimited coinage of silver and the elimination of national banks. The rise of black leadership in the state also undermined Fusionist strength. The Russell administration's appointments of many black individuals to governmental positions gave the Democrats a stirring political issue with which to energize numerous white citizens.

By the political campaign of 1898, the sole rationale for continued Republican-Populist cooperation was fear of Democratic control. Predictably, the ensuing Fusionist campaign was weakened by the absence of any other reason to win the election. Unable to contest the Democrats' rhetoric and violence, the cooperationists lost control of state government forever. The success of the Democrats and their repeal of the Fusionists' election laws in 1899 reinforced the defensive position of the cooperationists.

The final phase of Populist-Republican Fusion was the state campaign of August 1900, in which the major issue was a proposed Democratic constitutional amendment limiting access to the ballot. Voters would also elect several state-level officials and the next General Assembly. Given the white supremacy intent of the amendment, Populists and Republicans decided that white Populism would lead the opposition and emphasize the amendment's potential effect on those that were poor and white . Republicans officially attacked the proposed disfranchisement as an assault on the federal Constitution. The subsequent triumph of the Democrats destroyed Populism and ensured a dramatic decrease in black Republican votes. Henceforth, Republicans would meet the Democrats alone.

Cooperation between Republicans and Populists was initially an effort to democratize North Carolina politics by giving black and white citizens better access to the ballot and increasing local control of county government. It succeeded to the extent that several groups traditionally excluded by Democratic rule won the right to vote and hold public office. Through the impetus of Populism, Fusion provided a vehicle for the encouragement, adoption, and implementation of laws regulating businesses and benefiting debtors, especially during the General Assembly of 1895. Yet cooperation was also characterized by expedience and fundamental differences as to policy and political strategy; cooperation had occurred partly because Populist and Republican leaders did not believe that their parties could achieve independent pluralities. Ultimately, the experience of Fusion reflected deep conflicts over the meaning of democracy, race, and government in late nineteenth-century North Carolina.