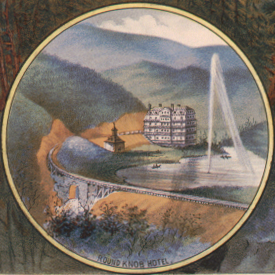 The Round Knob Hotel Affair was a major political event in North Carolina in the late 1890s, pitting the Fusionist administration of Governor Daniel L. Russell Jr. against the state's Railroad Commission in a contest over the reduction of rates. The three-person Railroad Commission, created in 1891, was authorized to set passenger and freight rates for state railroads and to determine the valuation of railroad property for tax purposes. In the 1890s railroad rates constituted a significant political issue, largely because their reform was demanded by organized agricultural shippers in the state Farmers' Alliance and Populist Party.

After the triumph of Populist-Republican Fusion in the election of 1896, the new Republican governor Russell encouraged the Railroad Commission to reduce rates and increase taxes on railroads. Yet the commission did not dramatically lower rates in 1897. Russell, supported by influential reformers, including Populist U.S. senator Marion Butler and North Carolina Supreme Court justice Walter Clark, did not accept this defeat quietly. Russell wanted to ensure that in the future the commission would be vigorously antirailroad.

Conveniently, even before the failure of rate reduction, Russell's attention had been drawn to a possible breach of public trust by two railroad commissioners, James W. Wilson and S. Otho Wilson (no relation). The governor's concerns focused on the Round Knob Hotel, a resting and eating place on a branch of J. P. Morgan's Southern Railway Company

On 24 Aug. 1897 Governor Russell, acting pursuant to a section in the Railroad Commission law allowing him to remove from office any commissioner having an interest in a railroad, demanded that the Wilsons show cause why they should not be removed. Although James immediately replied that he had sold his interest in the Round Knob because of concerns raised by Russell's order, and Otho tried to distance himself from his mother's business, Russell suspended the Wilsons on 23 September. Initially the two commissioners refused to vacate their offices, but after a legal battle the Fusionist state supreme court, with the vote of Walter Clark, upheld Russell's right to remove them.

The Round Knob Hotel affair highlighted the aggressiveness of Russell, the sensitivity of the more radical Fusionist reformers to the corruptive power of the railroads, and the increasing importance of the regulatory authority of North Carolina government. Ironically, the incident helped splinter Fusionist ranks by further isolating Russell from some Republicans, tainted Fusionist rule with scandal, and raised serious ethical questions about the political activities of Justice Clark. Because the 1899 Democratic legislature abolished the Railroad Commission, the affair also confirmed the commission's limitations, North Carolina's first extensive experiment with administrative government.

"Hotel and Fountain at Round Knob." from Sawyer, Mrs. Harriet Adams. Souvenir of Asheville or the Sky-Land. St. Louis: Nixon-Jones Printing Co. ,1892. http://toto.lib.unca.edu/booklets/souvenir_asheville_sky_land/default_souvenir_sky_land.htm