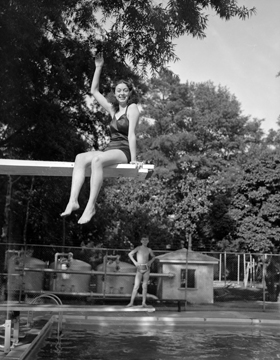 On 9 July 1933 the Tarboro Town Council voted to ask Frick and Company of Waynesboro, Pa., to design and install a refrigerating unit for its new municipal swimming pool. After operating for only three months, the olympic-design pool, containing 300,000 gallons of water and with a constant flow of 400 gallons per minute, had become uncomfortably warm from the summer's record heat and the activity of swimmers. By mid-August Frick had installed the refrigerating device at a cost of $2,592, making the Tarboro pool what is believed to have been the first and perhaps only refrigerated outdoor pool in the country.

Tarboro's "cool pool" drew crowds of swimmers and swimming meets throughout the 1930s. In 1943 the national Amateur Athletic Union was held there, with Governor J. Melville Broughton as the honored guest. Native Tarboro swimmers won blue ribbons all over the country during this period, as the town's unique pool helped put it firmly in the national swimming picture.