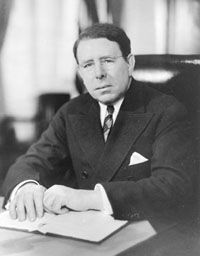 J. Melville Broughton (1888-1949), the only native of Wake County to serve as governor of North Carolina, led the state through most of the World War II era. Born in Raleigh on November 17, 1888, the “War Governor” was the son and namesake of Joseph Melville Broughton and the former Sallie Harris. His father, a real estate developer and insurance salesman, and uncle, Needham Broughton, helped organize Tabernacle Baptist Church in Raleigh, where the future governor for many years served as Sunday School superintendent and, for most of his adult life, taught the men’s Bible class. In Raleigh young Broughton attended the public schools and Hugh Morson Academy. From there he moved on to Wake Forest College, where he played football and graduated in 1910. Subsequently he served as principal of Bunn High School in Franklin County from 1910 to 1912 and, for a few months, as a reporter for the Winston-Salem Journal. Broughton studied law at Wake Forest and at Harvard and in 1914 began practicing in Raleigh. In 1916 he married Alice Willson; they had four children.

In Raleigh Broughton took an active role in civic and political affairs, serving on the school board from 1922 to 1929 and as city attorney for several years. In 1926 and 1928 voters elected him to the state Senate, where he advanced workmen’s compensation and secret ballot legislation. After two terms Broughton returned to his law practice, preferring civil practice to criminal litigation. He was a respected legal scholar penning articles on trusts and the legal status of women. Broughton served as a trustee for his alma mater, Wake Forest College, as well as Shaw University and, in later years, the University of North Carolina. In 1936, a year in which he served as president of the state bar association, he delivered the keynote speech of the Democratic state convention. In 1940 Broughton led a field of seven candidates for the Democratic nomination after the first primary. Wilkins P. Horton, who placed second, declined to call for a runoff and in the fall Broughton defeated Republican Robert H. McNeill. Mounting concern over the war in Europe overshadowed the campaign.

As governor Broughton, who had failed in his attempts to extend the school term to eight months as a legislator, endorsed and saw the legislature extend the term to nine months and add a twelfth grade to public schools. A retirement plan was instituted for state employees and, for the first time, the state provided aid to public libraries, the Art Society, and the Symphony Society. Governing boards for state hospitals and charitable institutions were consolidated. Broughton appointed a board of inquiry to investigate poor conditions in the mental hospital at Morganton. The governor launched an ambitious “Good Health Program” to extend medical care and hospital construction across the state. As part of that program the Medical Care Commission was established. The legislature, on the governor’s recommendation, removed the sales tax on all food items intended for home consumption. Like his predecessors Ehringhaus and Hoey, Broughton opposed the transfer of authority from the states to Washington and warned against increased federal power.

The Japanese attack on Pearl Harbor and U.S. entry into World War II took place eleven months into Broughton’s term. As Chief Executive in the state where more men were trained for service than any other, Broughton took charge of extensive civil defense and preparedness exercises. On April 9, 1941, he attended the commissioning of the U.S.S. North Carolina in New York. In 1944 he was nominated as a “favorite son” candidate for vice-president.

In 1948 J. Melville Broughton defeated William B. Umstead who had been appointed to fill the unexpired term of Josiah Bailey in the United State Senate. Broughton took office on December 31, 1948, but died just over two months later, on March 6, 1949. He is buried in Montlawn Memorial Park in Raleigh.