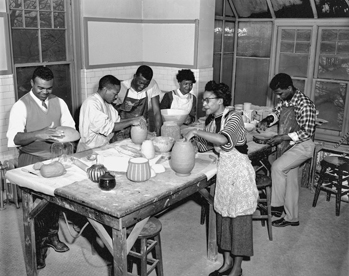 Shaw University, founded in Raleigh in 1865, was the first African American institution of higher learning in the South and one of the first in the nation. The university had its beginnings in December 1865, when Henry Martin Tupper, a white educator from Monson, Mass., started a class in theology for the purpose of teaching formerly enslaved people how to read and interpret the Bible after emancipation. During enslavement, black people in the United States were forbidden from learning to read or write by their enslavers, as well as by state and national laws. From this class evolved the Raleigh Institute (1866), later changed to Shaw Collegiate Institute (1870) and finally incorporated as Shaw University (1875). The school was named for its foremost benefactor, Elijah Shaw of Wales, Mass. The private, Baptist-affiliated liberal arts institute has always been open to both men and women. This coeducational status was assured with the construction in 1873 of Estey Hall, the first dormitory in the nation devoted exclusively to housing African American women.

Shaw University graduated its first college class in 1878, its first medical school class in 1882, its first law class in 1890, and its first pharmacy class in 1893. The school also had a normal (high school) department, which was changed to the Education Department in 1909. With the discontinuation of the normal department and professional schools (between 1909 and 1926), Shaw became the first African American institution in the South to be devoted exclusively to college and theological work. 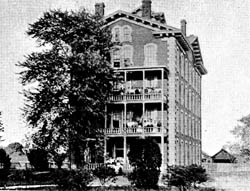 In the early 2000s Shaw University enrolled more than 2,400 students in liberal arts and specialized degree programs. It has a strong international studies program, and its Center for Alternative Programs of Education allows students an opportunity to pursue academic degrees through independent study, flexible course scheduling, and credit for prior learning experiences.