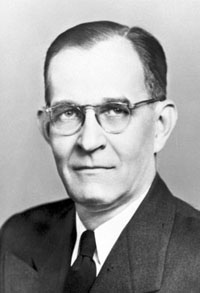 A veteran of both houses of the United States Congress, William B. Umstead (1895-1954) suffered a heart attack two days after his inauguration as governor and spent much of his twenty-two month term in office confined to bed leading up to his death on November 7, 1954. The son of legislator and Confederate veteran John W. Umstead and the former Lulie Lunsford, a teacher, William B. Umstead was born on a farm near Bahama in Durham County on May 13, 1895. A 1916 graduate of the University of North Carolina, Umstead, who excelled as a debater, taught school in Kinston for a year. In 1917 he joined a machine gun battalion of the 81st (“Wildcat”) Division, serving in France and rising to the rank of first lieutenant. On his return to civilian life Umstead studied law at Trinity College and in 1920 began practice in Durham. In 1922 he was elected prosecutor and in five years became solicitor. In 1929 he married Merle Davis of Rutherford County; they would have one child, a daughter also named Merle.

In 1932 the voters of the Sixth District elected Umstead to the first of three terms in the U.S. House. A political moderate, Umstead supported causes of interest to his constituents, such as tobacco, rural electrification, and soil conservation. In 1938 he declined to seek reelection and returned to his law practice. R. Gregg Cherry in 1944 asked Umstead to manage his campaign for governor; after the election he served as chairman of the state Democratic executive committee. In 1946, on the death of Senator Josiah Bailey, Governor Cherry appointed Umstead to the Senate. Two years later, in his only political defeat, Umstead lost to former governor J. Melville Broughton in the Democratic primary for the Senate seat. In 1952 he defeated Judge Hubert F. Olive in the Democratic primary for governor and in the fall defeated Republican H. F. (“Chub”) Seawell.

Umstead’s serious health problems appeared without notice, frustrating what should have been the climax to his political career. On inauguration day, January 8, 1953, he was hoarse and appeared to suffer from a cold. The long day’s events were tiring and two days later the governor was admitted to Watts Hospital in Durham where a heart attack was diagnosed. He remained hospitalized until May 21 and then moved to the second-floor bedroom in the Executive Mansion. As his health would permit, he took on responsibilities and met with his staff and with legislators.

Governor Umstead, who in his inaugural address issued a call for a “better tommorrow,” continued programs initiated by his predecessor Kerr Scott by endorsing state bond issues to finance school buildings and improve mental institutions. He reorganized the Board of Paroles and put in place uniform and equitable policies. Umstead urged the state to seek new and more diversified industries. The U.S. Supreme Court decision mandating school desegregation was handed down on May 17, 1954. Unlike other southern governors, Umstead counseled moderation and appointed a nineteen-member biracial panel to make recommendations. Hurricane Hazel lashed the state on October 15, 1954, leading the governor to ask the federal government for a disaster declaration. For a short term in office, Umstead had the unusual distinction of appointing two members of the U.S. Senate. Following the death of Willis Smith he selected Alton Lennon and on the passing of Clyde Hoey he appointed Sam J. Ervin.

Described by a Raleigh newspaper as “painfully lacking in personality,” Umstead was widely admired for his integrity and his commitment to public service. The governor spent three weeks in October 1954 in the hospital. On November 4, weakened by budget hearings, he was hospitalized again and, three days later, became the first chief executive since Daniel Fowle in 1891 to die in office. He was buried at Mount Tabor Methodist Church at Bahama.