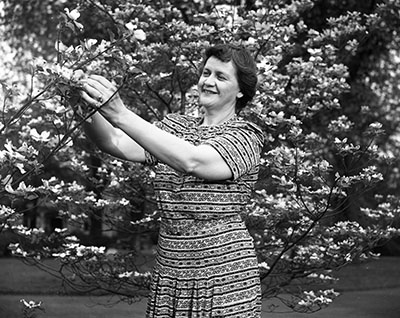 While Alice Willson Broughton was not the first North Carolina first lady from Wake County, the Broughtons were the first and only governor and first lady to live in the Executive Mansion who were both Wake County natives. Her husband, Joseph Melville Broughton, also has the distinction of being the only governor in the state's history to be a native of Raleigh.

Alice Harper Willson was born July 13, 1889, the daughter of William W. and Alice Partin Willson. Alice Willson Broughton's roots ran deep in Raleigh, Wake County, and state his­tory. Her father was city clerk of Raleigh and secretary of the Grand Lodge of Masons of North Carolina. Her mother was a public schoolteacher. A great uncle, Donald Bain, was state treasurer for many years.

Alice Broughton, who was one of four children, often remembered the joys of growing up in Raleigh. She recalled fondly the occasions when she was awakened by her father who had brought oysters home from the Masonic lodge to share with her. She also remembered meet­ing her father on a corner near their home where he got off the streetcar after a day's work. Even as a child Alice Willson would be up and out of bed early. For much of her childhood, she had private music lessons each morning at 7:30. Her teacher was Professor Levin, who had been a well-known German musician. He believed that music, like much else, could be best mastered early in the day while the mind was fresh. Alice carried that idea with her throughout her life. As a young woman, she continued her education in her hometown,  attending Peace College. 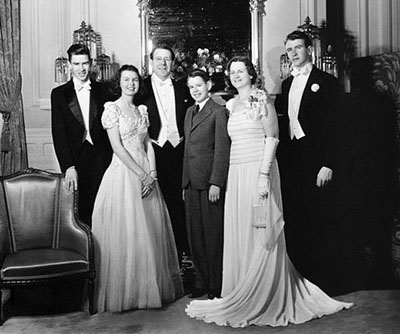 Alice Willson knew her future husband, Melville Broughton , all through school, but their romance did not begin until a hayride with a group of young people from Tabernacle Baptist Sunday School when Broughton was a student at Wake Forest College. On December 14, 1916, they were married. At that time, he was a young lawyer, and she worked in the circula­tion department of a Raleigh newspaper, a position she held for eight years.

Alice Willson and her family were strong Methodists. After she married Mr. Broughton, however, she followed him to Tabernacle Baptist Church. There they worked together in many areas of the church, including the twenty-six years during which Mr. Broughton was Sunday School superintendent.

The Broughtons always discussed things with each other before making major decisions. When Mr. Broughton considered running for governor he asked for her opinion. She responded, "I  think you are fine enough to be governor, and if you think it is the thing to do, I feel that no greater honor can come to a man than being governor of his own state." During the campaign , as she drove him around the state, they engaged in intellectual conversations. At their appointed stops, while he spoke to the crowds about the issues, she crocheted. By the end of  the campaign, she had crocheted an entire bedspread.

The Broughton family moved into the Executive Mansion in January 1941 with four children: Alice Willson (August 30, 1919-  July 27, 1977); Joseph Melville Jr.  (March  24, 1922- April 17, 1997), who married Mary Ann Cooper; Robert Bain (born November 28, 1924), who married Celeste Gold and subsequently, Sumner Parham); and Woodson Harris (December 20, 1927- April 16, 1979). Woodson, the youngest, was thirteen and the most resistant to moving from his Raleigh home to the mansion. Woodson asked his mother if they could rent the governor's mansion to someone else and remain in their own home. He adapted rather well, however, as one of Alice Broughton's first acts was to turn a third-floor room into a clubroom for his Boy Scout troop . 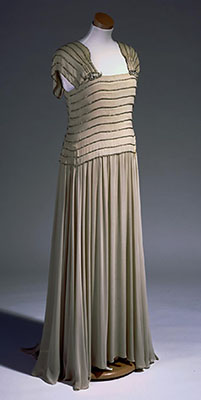 The Broughtons' term in the mansion, like that of the Bicketts a quarter century earlier, was dominated by a world war. Alice Broughton assisted in the war effort in many ways. She even carefully apportioned the food served at the mansion, including the traditional breakfasts served to General Assembly members. When word got out that meals at the governor's mansion were affected by wartime rationing, citizens from across the state sent the food stamps necessary to pur­chase many food items. Alice Broughton welcomed servicemen into the mansion for weekend visits, just as Mrs. Bickett had done during World War I. Alice Broughton pro­moted the national rubber drive by stripping fifty-eight pounds of rubber tread from the service staircase in the mansion and person­ally taking it to a collection center. She fre­quently christened Liberty ships that had been built at Wilmington. She also promoted victory gardens by tending one herself on the mansion grounds. The Broughtons boosted the morale of servicemen by invit­ing them to be overnight guests at the Executive Mansion.

Some important changes were made at the mansion during the Broughtons' stay. In 1941 an elevator was installed in an area within the service staircase. A beautiful state silver service, designed and engraved by silversmiths Fred Starke of Connecticut and Clarence Bowman of Raleigh, was created. It included the state seal, pine boughs, dogwood, and other symbols of North Carolina. Alice Broughton, in looking back on her time in the mansion, always consid­ered the acquisition of the silver service to be one of her most lasting accomplishments.

Beginning in 1941 and especially the following year, Alice Broughton and her husband were extensively involved with legislation to establish and promote both a state-sponsored symphony orchestra (now known as the North Carolina Symphony) and a state art gallery (now known as the North Carolina Museum of Art). Alice Broughton's patronage of those institutions continued throughout her tenure as first lady and for many years thereafter. She was appointed to the Tryon Palace Commission in 1950 and main­tained a deep commitment to that body throughout her life.

After completing his term as governor, Melville Broughton ran successfully for the U.S. Senate in 1948 against his good friend William B. Umstead. The stress of the campaign seemed to tax his strength, however. On March 6, 1949, only months after taking office, he died. Alice Broughton moved back to her home in Raleigh's Hayes Barton neighborhood and lived there until her death on August 15, 1980, at the age of ninety-one. Alice Harper Willson Broughton was buried in Raleigh's Montlawn Memorial Park.

During her long and productive life, Alice Willson Broughton's interests and activities were varied. She was a member of the Raleigh Garden Club, the Daughters of the American Revolution, the Needlework Guild, the Woman's Club of Raleigh, and the Raleigh Little Theatre. She also belonged to the Roanoke Island Historical Association, the North Carolina Antiquities Society, and the North Carolina Art Society. While her children were growing up, she was active in the Parent-Teacher Association. Alice Broughton also served on the North Carolina Democratic Executive Committee,  the North Carolina Prison Advisory Council, and the Wake Forest University Board of Trustees. Upon her death, a close personal friend, Dan Sapp, rector of Christ Episcopal Church, said, "Mrs. Broughton's primary interest was in people."