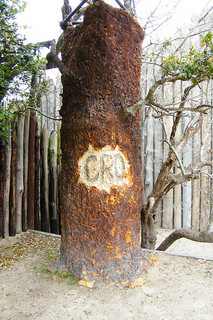 CROATOAN was the sole complete word found on Roanoke Island by John White on 18 Aug. 1590 in his search for the English colonists, including his granddaughter Virginia Dare, whom he had left there three years earlier. White reported that the word in "fayre Capitall letters was graven" on one of the chief trees or posts of a palisade or stockade structure that had been built on Roanoke Island. Earlier in the day's search, White had seen the three Roman letters " CRO" carved into a tree on the bluff of the sound shore. In neither place did he discover a cross, the secretly agreed upon sign that the colony, now known as the Lost Colony, was in distress.

White's statements about the word and the absence of a cross indicate that he was comforted to find the word because he thought it was a "certaine token" or sign that the colonists had relocated to Croatoan, the principal town of the Croatoan (or Hatteras) Indians near Cape Hatteras. White recounted that the colonists had discussed leaving just such a message for him in 1587, although they had then considered moving 50 miles into the mainland rather than about 60 miles south to an isolated barrier island. White recognized Croatoan as the native town of the Indian Manteo, who made two trips to England in the 1580s and seemingly had embraced the English colonial efforts. (It is believed that Manteo's mother was a tribal monarch of the Croatoans.)

Ethnologists and anthropologists believe that the word "Croatoan" may have been a combination of two Algonquian words meaning "talk town" or "council town."