Originally published as "When Dinner Wasn’t Quick and Easy" 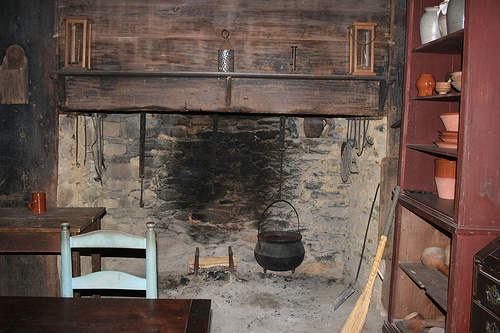 Today’s rapidly increasing demands and hectic schedules make it challenging for a family to dine together. Many dinners include fast food or carryout delivery from places like KFC or McDonald’s. When families do have time to prepare a meal, it is rarely “from scratch.” Technology that we often take for granted—such as microwaves and refrigerators—has greatly affected what we eat and how we eat it.

During the early 1800s, cooking dominated the time and energy of the average housewife. There were no big grocery stores where families could go to purchase food, and eating out was truly a rare treat, usually possible only when traveling. Most fruits and vegetables were grown on the farmstead, and families processed meats such as poultry, beef, and pork. People had seasonal diets. In the spring and summer months, they ate many more fruits and vegetables than they did in the fall and winter. During those colder seasons, families found ways to preserve their food.

The three main ways of curing (the process of preserving food) during this time included drying, smoking, and salting. Each method drew moisture out of foods to prevent spoiling. Fruits and vegetables could be dried by being placed out in the sun or near a heat source. Meat products could be preserved through salting or smoking. A salt cure involved rubbing salt into the meat, which was then completely covered in salt and placed in a cool area for at least twenty-eight days. During this time, more salt was constantly added. When the meat was no longer damp, it was washed, then shelved or bagged and left to age. Families would hang meat preserved through a smoke cure in rooms or buildings with fire pits. For a month, the meat was constantly exposed to smoke, which dried it out while adding flavor. Using different kinds of wood for the fire, such as hickory or oak, could produce different tastes.

A typical day on the farm began very early. Women rose and built the fire based on the meals planned for that day. Families who could afford to have detached kitchens—kitchens in buildings separate from the house—did so for several reasons. The kitchen often was hot, smoky, and smelly. Most North Carolina families did not have the resources for a separate kitchen, though, and the hearth provided the center of home life and family activity. With no ovens or electricity, women prepared meals on the hearths of brick fireplaces. They used different types of fires and flames to prepare different types of food. For example, a controllable fire was used to roast and toast, while boiling and stewing required a smaller flame.

To use all of the fire’s energy, families shoveled coals and ash underneath and onto the lids of Dutch ovens. Standing on three legs and available in a wide array of sizes, the cast-iron Dutch oven was one of the most important tools found on the hearth. It was used to prepare several types of food and allowed cooking from both the top and the bottom. Dutch ovens evolved into woodstoves, common in homes of the later 1800s and early 1900s before most people got electricity at home.

Preparing meals was not just a matter of starting a fire for cooking. Spices, such as nutmeg and cinnamon, and seasonings, like salt and pepper, had to be ground up with mortars and pestles. Milk had to be brought in from the family dairy cow and cream and butter made from it. After someone brought in the milk, it usually sat out for about an hour. The cream rose to the top, separating from the milk. Women placed this cream into a butter churn and beat it until it hardened, first into whipped cream and eventually into butter!

Every family member contributed to the production and preparation of meals. Men and boys spent most of their time outdoors. Chores included working crops in the fields, feeding larger livestock, and hunting. Diets included wild game, such as deer and turkeys. Women and girls worked mainly in the kitchen and fed smaller livestock.

When it came time to butcher animals, families joined with their neighbors to share the workload and the meat. Pork was the staple meat in the Southeast until the 1940s. Hogs proved more manageable than their much larger counterparts, cows. The taste of pork also improved with curing. Neighbors often gathered in the fall, using the time to get their work done but also to catch up, sharing news and gossip. What began as a chore turned into a social event. This was also the case at harvesttime. Neighbors pitched in to bring in crops such as corn and wheat. After the work was done, everyone might celebrate with feasts, bonfires, and dancing.

Clearly, meal preparation two hundred years ago involved several more steps than it does now. Much like today, families usually ate three daily meals. The main meal in the 1800s, however, was not the large evening meal that is familiar to us today. Rather, it was a meal called dinner, enjoyed in the early afternoon. Supper was a smaller meal eaten in the evening.

A big difference between the way people eat today compared with long ago is the work and time needed. For modern families, food and meals are merely an afterthought in the schedule. Two hundred years ago, food and food preparation stood at the center of the family’s daily lifestyle. Without the advances in technology that help us store, preserve, and prepare food, men and women would spend much of their time getting meals ready to eat. Instead of calling pizza delivery, imagine spending all day in front of a fire!

At the time of this article’s publication, Courtney Hybarger was a historic site interpreter at President James K. Polk State Historic Site in Pineville.