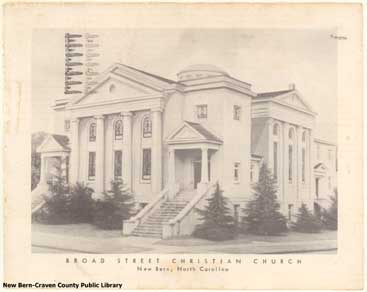 The Disciples of Christ in North Carolina belonged to the Stone-Campbell movement of primitive Christianity that spread rapidly in Kentucky and Tennessee in the three decades following the famous Cane Ridge Revival of 1801. The Campbellites had been followers of the frontier Scotch-Irish Presbyterian minister Thomas Campbell and his precocious, charismatic, and Scottish-educated son, Alexander. The Campbells, especially Alexander, brought to frontier religion the best elements of European pietism and eighteenth-century mainstream Christianity. They sought to purge the trans-Appalachian West of sectarian differences between Baptists, Methodists, and Presbyterians by blending together evangelical elements common to all Protestants.

Barton Warren Stone, a Presbyterian minister involved in the Cane Ridge Revival, brought his former Presbyterian followers into alliance with the Campbellites in the 1830s. Stone was the first link between the Disciples of Christ and North Carolina. In 1790-91 he had studied at David Caldwell's Academy in Guilford County, and he experienced conversion during a revival led by James McCready in 1791. Stone's friend and protégé, Joseph Thomas, famous for his flowing white robe and known as the "white pilgrim," was an itinerant preacher in North Carolina between 1811 and 1815, influencing several future Disciples preachers. Between 1815 and 1820 Thomas preached in southwestern Virginia in churches that later became affiliated with the Disciples. By 1828 he was living in central Ohio, where his son-in-law became a Disciples minister.

Several circumstances opened North Carolina as a Disciples mission field. The Stone-Campbell newspaper, the Millennial Harbinger (which replaced an earlier publication, the Christian Baptist, in 1830), attracted a growing number of North Carolina subscribers. In 1833 the Dover Baptist Association in eastern Virginia expelled several churches for espousing Campbellite views. Encouraged by a visit from the Disciples' patriarch, Thomas Campbell, B. F. Hall, one of the expelled Virginia Baptists, began preaching Campbellite doctrine in the Edenton area. Hall condemned the use of creeds, church constitutions and covenants, systems of discipline, qualifications for church membership, and, according to a Baptist critic, preached that "any person is properly qualified for baptism who will say that he believes in Christ, loves God, and is desirous of the ordinance." This set of beliefs attracted many former O'Kellyites, members of another nondenominational primitive movement in the South. The North Carolina Campbellites also attracted adherents from the Free Will Baptists who had broken away from the Regular Baptists over the issue of predestination.

From the 1840s onward, Disciples of Christ churches in North Carolina struggled to resolve the paradox of New Testament primitive Christianity-how to be both otherworldly, unencumbered with denominational trappings, and also truly biblical, to teach a complex sacred text with scholarly and theological integrity. The preeminent Disciples intellectual was John Tomline Walsh (1816-86), a Virginia physician and former Methodist who responded to an invitation in 1852 to evangelize eastern North Carolina. He found the existing Disciples churches in the state isolated from each other and uninformed about the theology of primitive Christianity. Based in Kinston, he founded in 1853 the journal Christian Friend (later the Watch Tower) to raise the intellectual level of religious discourse, emphasizing the legitimacy of interpreting scripture by recognizing that "literal and figurative" scriptural language "are often mingled together in the same prophesies and require great care and discrimination to understand."

In the face of strenuous opposition-one Baptist writer accused Walsh of "big-headism"-Walsh and his followers advocated, and in 1877 finally achieved, creation of the North Carolina Christian Missionary Convention as the governing body of the Disciples of Christ in the state, with Walsh as the convention's first president. John J. Harper, ordained in 1862, succeeded Walsh after 1886 as the most influential Disciples minister and educator. He became the first president of the church's Atlantic Christian College (modern-day Barton College) in Wilson, incorporated in 1902. The region between Kinston, Wilson, and Rocky Mount has remained the center of Disciples of Christ activity. In the early 2000s, 106 of the 138 Disciples of Christ congregations in North Carolina were in the eastern part of the state.

Griffith Askew Hamlin, "Educational Efforts among the Disciples of Christ in North Carolina during the Years 1852-1902" (Th.D. diss., Bethany College and Divinity School, 1947).

David E. Harrell Jr., The Social Sources of Division in the Disciples of Christ (1973).

I am doing research on

I am doing research on Alexander Campbell and the rise of sectarian denominationalism. Can I use information from North Carolina Encyclopedia for the online for the research? thanks

Yes, this article was reprinted with permission from UNC Press's Encyclopedia of North Carolina. So, you may use it as a citation in your research.