The Elizabeth II, a historic attraction on Roanoke Island, is a 69-foot, square-rigged sailing ship representative of the Elizabethan vessels used to carry the first English colonists to the New World. Sir Walter Raleigh sponsored three voyages to Roanoke Island between 1584 and 1587, and the Elizabeth II is named for one of the seven vessels that sailed in Raleigh's second expedition in 1585. The original 50-ton Elizabeth was captained by Thomas Cavendish and probably carried mariners, colonists, and supplies to be used in establishing a military garrison to support England's claim to the New World. 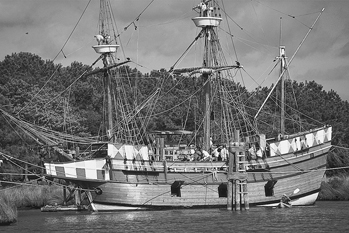 The twentieth-century Elizabeth II was constructed as part of America's Four Hundredth Anniversary, which, between 1984 and 1987, commemorated the anniversary of the Roanoke Voyages. Constructed on the waterfront in the town of Manteo, the ship was permanently berthed a few hundred yards from the construction site.

With historian H. G. Jones as chairman, the America's Four Hundredth Anniversary Committee, which had been appointed by North Carolina's governor in 1978, created the nonprofit American Quadricentennial Corporation to assist in and finance various programs, with special emphasis on the ship. The corporation raised $650,000 privately to build the ship, and the General Assembly in 1982 provided $1.4 million to develop facilities for visitors to the site. Historical ship designer William Baker prepared the initial plans, and naval architect Stanley Potter completed the design for the 50-ton ship. Constructed almost entirely by hand, the ship was launched in 1983 and finished in the water by early 1984. Princess Anne of Great Britain christened it on 13 July 1984.

The ship-which sometimes sails to nearby coastal sites-is part of the 27-acre Roanoke Island Festival Park across from the Manteo waterfront. The park, billed as a celebration of the birthplace of English-speaking America, features the interactive Roanoke Adventure Museum, a settlement site, living history programs, and extensive visual and performing arts activities. An Outer Banks History Center houses an extensive library of resource material. The heavily visited Elizabeth II and Roanoke Island Festival Park-like Tryon Palace, the USS North Carolina Battleship Memorial, and the State Capitol-is a separate section of the Department of Cultural Resources's Division of State Historic Sites, which also includes the State Historic Sites Program.