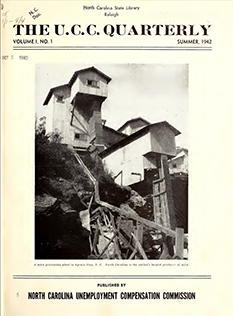 In response to federal initiatives and requirements, the North Carolina General Assembly called a special session in December 1936 and established the state Unemployment Compensation Commission. Its primary function was to aid citizens who were out of work due to circumstances beyond their control and to continue to fund such assistance in consonance with federal directives. In 1939 the legislature extended the commission's quasi-judicial powers, stipulating that its decisions, when docketed by a clerk of court, carried the same force as judgments of a superior court.

Following the nation's entry into World War II, President Franklin D. Roosevelt requested that the states' separate employment services be centralized into one federal agency responsive to the demands of national defense. Effective 1 Jan. 1942, the records of the North Carolina State Employment Division and various other personnel under the Unemployment Compensation Commission were transferred to the U.S. Employment Service under the Social Security Board. The next year the General Assembly empowered the commission to cooperate with other unemployment compensation agencies and make reciprocal agreements with agencies of the federal and other state governments.

In November 1946 the State Employment Division was returned to the Unemployment Compensation Commission, and in 1947 the legislature changed the agency name to the Employment Security Commission. Under the Executive Organization Act of 1971, the Employment Security Commission was placed within the Department of Commerce for administrative purposes, although the commission retained its previously granted powers and duties and was not subject to the authority of the cabinet-level departmental secretary.

The modern commission offers a variety of services and programs, yet its organizational structure is based on its original divisions of Employment Service, Unemployment Insurance Compensation, Labor Market Information (formerly the Bureau of Research and Statistics), and the Office of the General Counsel. In addition to providing job referral and training, the Division of Employment Service offers services to special groups, such as migrant and seasonal workers, veterans, youth, senior citizens, and the handicapped. It also directs federal programs in the state, including the Work Incentive Program, Veterans Employment Service, and the Job Training Partnership Act.