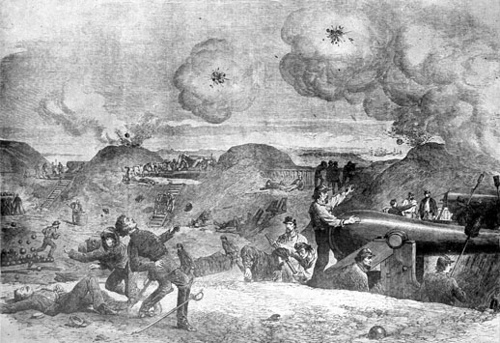 Fort Fisher, the largest earthen fortification in the world in 1865, was a Confederate military facility built approximately 18 miles south of Wilmington to defend the New Inlet into the Cape Fear River. Construction began in the spring of 1861, and the fort was expected to be battle ready by the end of September. Work continued under Col. William Lamb for several years. By 1865 Fort Fisher extended across Federal Point, facing north, then turned south 1,900 yards along the sea. Both faces of the fort consisted of sod-covered mounds of sand, inside each of which was a bombproof shelter. Between these were platforms with 44 guns, most of which were smoothbore Columbiads. Three mortars and three Napoleon smoothbores augmented the larger pieces. A sally port midway in the landface allowed access to a palisade of sharpened logs nine feet in height. Two dozen mines outside this could be detonated from inside the fort.

Where the land met the sea was the Northeast Bastion, adjacent to which was a semicircular work known as the Pulpit, in which Lamb had a field headquarters. Underneath this was a bombproof hospital; behind it was the main magazine. A buried telegraph line linked Lamb to Wilmington and the Mound Battery, a 60-foot edifice at the south end of the sea face. Beyond the Mound Battery stood Battery Buchanan. Two stories in height, it boasted five guns. Lamb also had a line of rifle pits from the sea face across to the Cape Fear River.

Because of Fort Fisher's effectiveness, Wilmington remained the last port open to supply Gen. Robert E. Lee's Confederate forces. Supplies reaching the port were shipped by rail across eastern North Carolina to the army protecting Richmond, the Confederate capital. The Union navy, with a very large fleet, bombarded the fort on 24-25 Dec. 1864 and again on 13-15 Jan. 1865. On 15 January, a Union landing force captured the beleaguered fort.

Colonel Lamb tried without success until his death in 1909 to have the fort made into a national military park. The New Hanover County Historical Commission placed a marker there in 1921. Ten years later, the Fort Fisher Preservation Society was formed to try to prevent further beach erosion and to foster public interest but had little to show for its efforts. In World War II a new military post was constructed over part of the old fort and erosion continued at the sea face.

The approach of the centennial of the Civil War aroused interest in Fort Fisher, and in 1958 the state leased 189 acres of federal land. Two years later the North Carolina Department of Archives and History began to develop Fort Fisher as a North Carolina State Historic Site. Work progressed with the assistance of local organizations and individual citizens, and in 1962 the remains of the fort became a National Historic Landmark. The General Assembly appropriated funds for a visitors center, and a local restoration committee raised funds for the purchase of additional land. Before the end of the decade, further land and buildings were added to the site, and steps were taken, insofar as possible, to control erosion. Archaeological research and an underwater archaeology laboratory contributed to the understanding of the site, while exhibits at the visitors center and conducted tours brought more visitors.

The Office of Archives and History controls a majority of the 500 acres of owned and leased land, but the center of the modern Fort Fisher State Historic Site includes only about 30 acres. Special events at the site focus on the role of artillery at the fort. Period reproduction weapons, equipment, and clothing are used in living history demonstrations.

My family would like to travel to Ft. Fisher. I realize that due to COVID-19 , the ferry is not able to accommodate visitors. Do you have an update on when the ferry will be taking groups to Ft. Fisher?

I suggest you contact them directly. There website is at https://www.ncbrunswick.com/islands-towns/southport/fort-fisher-ferry/ and information about visiting the historic site can be found at https://historicsites.nc.gov/all-sites/fort-fisher