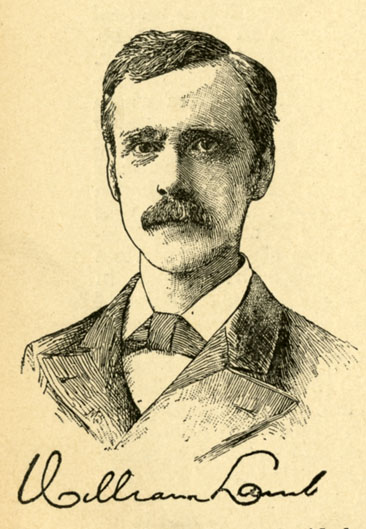 William Lamb, publisher, Confederate soldier, and politician, was born in Norfolk, Va., the son of William Wilson and Margaret Kerr Lamb. He attended the Norfolk Academy, the Rappahannock Military Academy, and the college preparatory Jones School in Bridgeport, Conn., before entering William and Mary College at Williamsburg, Va., in 1852.

At age twenty he was graduated with a bachelor of law degree. As he was too young to practice law, his father purchased for him a half ownership of the newspaper, Southern Argus, in Norfolk. While part owner and coeditor of the newspaper, Lamb participated in national as well as local politics. In 1856 he was a delegate to the Democratic National Convention. In 1857 he was instrumental in ensuring the election of a Norfolk city council that would institute a system of public education based on New England models. Finally, in 1860 he was a presidential elector for the Breckinridge Democrats. When Abraham Lincoln defeated John Breckinridge, Lamb felt that the Union could not be preserved.

In 1861 the Southern Argus was forced to close due to loss of staff to the Confederate army. On 18 April Lamb himself was appointed captain of Company C of the Sixth Virginia Regiment. This force had formerly been known as the Wood's Rifles, a militia company that Lamb had commanded at Harpers Ferry at the time of the John Brown raid in 1859. On 24 Sept. 1861, he was appointed major and quartermaster for the Wilmington District in North Carolina under Brigadier General Joseph R. Anderson. Lamb served as commander of Fort St. Philip, a minor defense work in the Wilmington area. In 1862 the Thirty-sixth North Carolina Regiment was formed and Lamb was elected its colonel. This regiment, also known as the Second North Carolina Artillery Regiment, was to form the garrison for Fort Fisher, at the mouth of the Cape Fear River, which protected the vital port of Wilmington. Lamb was appointed commander of the fort on 4 July 1862 and remained in that post for two and a half years. Under his direction, the fort's defenses were expanded and it became the largest earthwork fortification on the continent. Colonel Lamb was severely wounded and captured when it fell to Union forces on 15 Jan. 1865 after a heroic defense. Because of his courageous stand against the enemy, he often was referred to in later life as "the hero of Fort Fisher." The wounds he received during the final assault would leave him on crutches for seven years. He was confined to Fort Monroe, Va., and released on 1 May 1865.

Lamb returned to Norfolk and managed the shipping of coal for the Norfolk and Western Railroad, helping to make Norfolk the major coaling station on the Atlantic coast. He designed and used the first bill of lading to aid in shipping coal from cities in the American interior through Norfolk to Europe.

Politically he was again active as a Democrat, serving as a delegate to the Democratic National Convention in 1876. But in 1879 he joined the Readjusters (those who advocated readjusting the state's prewar debts without ruining taxpayers); this plus his high-tariff and other views held by the Republicans caused him to switch parties in 1882. He served three terms as mayor of Norfolk (1880–86) and turned down a fourth. His father and grandfather also had been mayors of Norfolk. Lamb served as Republican state chairman (1895–97) and was a delegate to the Republican National Convention in 1896. He became a consul for Germany and Sweden at Norfolk, and for his services King Oscar of Sweden conferred on him the Royal Order of Vasa.

Committed to the field of education, Lamb helped to establish public education in Norfolk. After the war he advocated education for blacks. He served on the board of visitors of the University of Virginia, was a rector of the College of William and Mary, and was the first president of the Norfolk Public Library. He contributed both time and money to build up the College of William and Mary and the University of Virginia; at the former institution, he helped to reestablish the Phi Beta Kappa fraternity, serving for many years as president. Additionally, he was active in the Virginia Historical Society. In 1899 he received a doctor of laws degree from St. Lawrence University, Canton, N.Y.

Lamb married Sara Ann Chaffee of Providence, R.I., in 1857. She was visiting her parents when the war broke out but, due to the influence of friends, was allowed to pass through Union lines to join her husband. She accompanied him throughout his life; during his two-and-a-half-year stay at Fort Fisher, she lived in a small cottage a short distance from the fort and narrowly escaped capture when it was overrun. The Lambs had three children. He died at home and was buried in Norfolk.

Bern Anderson, By Sea and by River: Naval History of the Civil War (1962).

Ralph Donnelly, The History of the Confederate States Marine Corps (1976).