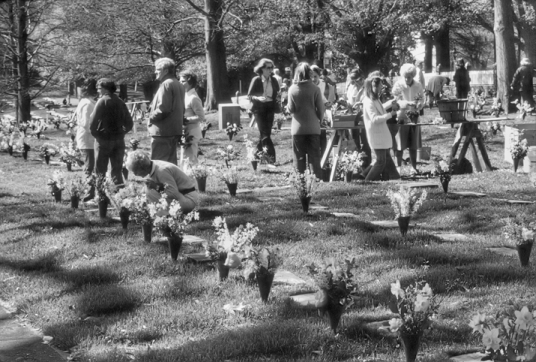 God's Acre is the name Moravian congregations give their church cemeteries. In this case, "acre" is from the Old High German word for "field"; "der Gottesacker," or God's Field, is where the physical body is planted and rests until it rises as a spiritual body. The area is divided into large squares with paths between them. All of the gravestones are recumbent, made of white marble, and measure 20" × 24" × 4" for adult graves. Their uniformity is symbolic of the Moravian belief that all people, no matter their position in life, are equal in the eyes of God.

The largest North Carolina God's Acre is in Winston-Salem, where members of the Salem Congregation are buried. It is about 40 acres in size and is located 100 yards north of Home Moravian Church and Salem Square. The first burial in Salem's God's Acre was that of John Birkhead on 7 June 1771. His grave can be found by entering under the center arch and looking to the right of the path in the second square. In the first square on the left of the center path is the grave of the first female buried on this site, Eva Anna Berothin (Beroth), who died on 3 Sept. 1773. Graves are arranged in accordance with the eighteenth-century choir system, with men and boys separated from women and girls. Familial ties are not of concern; God's family, it is believed, includes everyone, making God's Acre one big family plot.

An extension on the eastern side of Salem's God's Acre was opened in 1970, and the second part of the Easter Dawn Service is now held there annually. It is customary for family members or young people of Home Church to clean the white gravestones on Good Friday or the day after (Great Sabbath) and place flowers on the graves in the old section. When the thousands of worshippers enter God's Acre just before the sun rises on Easter morning, the area has the appearance of a vast garden. This new section can be reached by automobile from the road beside Salem Academy and the Salem College Fine Arts Building.

All Moravian churches have a God's Acre near their church building if their grounds are large enough to accommodate one. This is not the case in most urban areas, such as the city of Winston-Salem. Consequently, all 13 Moravian churches that form Salem Congregation use the God's Acre at Home Church. By the early 2000s the cemetery contained more than 6,000 graves. Most God's Acres follow the pattern of the one in Salem, offering a place of quiet beauty and repose in the midst of a world of noise and confusion.