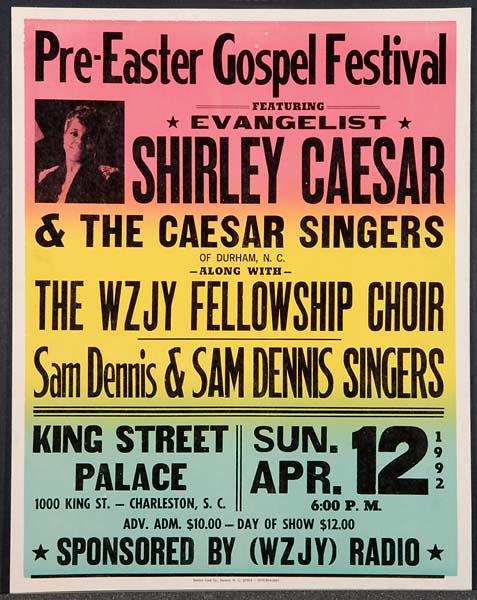 Gospel music, in both its African American and white traditions, is a very popular and influential musical form in North Carolina. The term "gospel" usually refers to a style of religious music performed by individual artists, quartets, or choirs rooted in late nineteenth-century urban spirituals, blues, and ragtime. Black gospel gained a significant following beginning in the 1930s. White gospel music, emerging in the 1870s and 1880s as a recognizable form, encompasses both formal church music used in regular Sunday services and other forms. In North Carolina, both black and white gospel is performed at church sings, at concerts, on radio and TV programs, and on records.

North Carolina has produced some of the nation's most successful artists in black gospel music. Shirley Caesar, known as the "First Lady of Gospel," was born in Durham in 1938. Her "rock gospel" sound, upbeat and rhythmic with large choral backups, helped propel gospel to the forefront of American music. Caesar won the first of eleven Grammy Awards in 1972, received honors from the Gospel Music Association and the National Association for the Advancement of Colored People, and was inducted into the Gospel Music Hall of Fame. In 1999 she received a National Heritage Award from the National Endowment for the Arts. In the 1980s Caesar, an ordained minister, established the Mount Calvary Word of Faith Church, in Raleigh, where she continued to serve as pastor in the early 2000s.

At the end of the twentieth century, Yanceyville's Badgett Sisters ranked among the finest black traditional gospel groups in the country. The a cappella trio was formed by their father, Courtelyou Badgett. After his death in 1978, his three daughters-Celester, Connie, and Cleonia-continued to perform. The group is well known in North Carolina, particularly through performances at the Festival for the Eno in Durham. The sisters received national recognition through appearances in New York City's Carnegie Hall with the North Carolina Black Heritage Tour and the release of several albums. After Cleonia, the group's lead singer, died in 1991, Celester and Connie continued to appear as the Badgett Sisters. They are noted for close harmony and enthusiastic renditions of traditional African American spirituals.

In the white gospel tradition, Canadian-born George Beverly Shea, a longtime resident of Montreat, became an internationally celebrated gospel singer during the mid-twentieth century. Shea, sometimes called "America's Most Beloved Gospel Singer," is best known for his long association with Billy Graham and TV pioneer and performer Arthur Smith. The Johnson Family Singers also sang with Smith. Kenneth M. Johnson of Randolph County, along with his father Jesse ("Pa"), mother Lydia ("Ma"), sister Betty, and twin brothers Bob and Jim, formed the gospel and popular music singing group and performed on WBT radio throughout the 1940s, 1950s, and 1960s. The family, which read music through shape-note notation, also appeared at schools, churches, conventions, sings, and rallies in the Carolinas and recorded for Columbia and RCA Victor. Betty Johnson left the group in 1952 to pursue a solo singing career. She made several television appearances on the Tonight Show and the Ed Sullivan Show, and her connection with Sullivan led to the family's appearance on his show in 1958.

Between 1948 and mid-1950 the Rangers, including Erman Slater, his wife Nora, and their children, lived in Raleigh and performed on WPTF and WBT. The Swanee River Boys, emphasizing soft harmony that fell somewhere between black and white gospel, sang for about a year with Grady Cole on CBS, originating from WBT. The Kingsmen's Quartet was both the leading singing group and gospel music promoter in Asheville. The group sang in the city auditorium and on Asheville's WLOS-TV in the 1970s.

Other North Carolina gospel groups, such as the Inspirations, Pine Ridge Boys, Down East Boys, Dixie Melody Boys, Heaven Bound, and the Anchormen, often performed in schools and churches. Their routines usually included gospel music in addition to other songs and comedy skits.

Horace Clarence Boyer, How Sweet the Sound: The Golden Age of Gospel (1995).

Shirley Caesar, The Lady, the Melody, and the Word: The Inspirational Story of the First Lady of Gospel (1998).