North Carolina boasts significant contributions to the musical tradition known as the blues. Throughout its formative decades, the blues was the music of solo artists rather than groups, with the guitar as the dominant instrument. Blues players generally picked the guitar with the thumb and one or two fingers, allowing them to play several strings at different times in complex patterns. 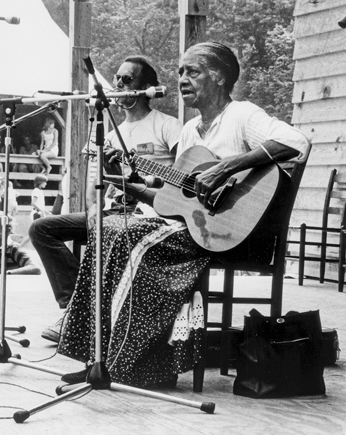 In the Carolinas, African American musicians around the first decade of the twentieth century developed a style of music known as the Piedmont blues. An important form of traditional music in North Carolina, the Piedmont blues is characterized by a guitar style that contains a distinct bass line played on the lower strings of the guitar as well as a melody picked on the higher strings. The bouncy, fingerpicked guitar style of Piedmont blues distinguishes it from Delta blues, which is often slow and mournful. Vocals, often paralleled by the melody played on the guitar, tell about the triumphs and trials of everyday life, such as work, love, heartbreak, loneliness, and the pitfalls of drinking and other overindulgences.

In the 1930s and 1940s, Durham was an important center of blues culture as a result of tobacco's unprecedented success. Rural African Americans flocked to the city, drawn by the comparatively high wages paid by the American Tobacco Company. Alden "Tarheel Slim" Bunn, Richard and William Trice, and Floyd Council are some of the well-known North Carolinians who earned their livings playing the blues at private parties and local clubs in Durham and the Piedmont during this time.

"Blind" Gary Davis, a South Carolinian later known as Reverend Gary Davis after his ordination, moved to Durham in the early 1930s and was a major influence on perhaps the best-known bluesman from North Carolina, Blind Boy Fuller. Born Fulton Allen in Wadesboro, Fuller moved to Durham in 1929 and soon became a regular among the street musicians on Pettigrew Street and near the booming tobacco warehouses. By the mid-1930s, Fuller moved into the clubs and recording studios. Having assembled an outstanding lineup of bluesmen that included the famous harmonica player Sonny Terry, himself blind, and his former mentor Davis, Fuller went on to record 135 songs on a number of labels, scoring minor hits with "Rag Mama Rag" and "I'm a Rattlesnakin' Daddy."

Within the Piedmont blues tradition, women developed a distinctive sound, and many of the best exponents of this tradition were North Carolinians, including Etta Baker of Morganton, Alga Mae Hinton of Johnston County, and Elizabeth Cotten of Carrboro. Cotten's inimitable picking style and heartbreaking vocals on "Freight Train" and other songs evoked the hard life shared by many southern, rural African Americans.

On the coast, Richard "Big Boy" Henry, born in Beaufort, grew up listening to bluesmen playing on the streets of New Bern, where his family moved during the Depression. Henry learned to sing and play guitar from itinerant South Carolinian Fred Miller, and the two played together at house parties and fish fries. When Miller relocated to New York City, Henry visited frequently, where he met fellow North Carolinians Sonny Terry and Brownie McGhee. The three recorded together in 1951, but the recording was not released until decades later. Disenchanted, Henry put music aside during the 1950s and 1960s, but he picked up his guitar upon returning to Beaufort in 1971. Henry's song "Mr. President," written in response to cuts in social welfare programs in the 1980s, earned him a W. C. Handy Award from the Blues Foundation. Interested in folklorists' attempts to document the work songs sung by himself and other African Americans who fished on menhaden boats, in 1988 he helped organize a group of retired fishermen known as the Menhaden Chanteymen to re-create the singing and share it with the public.

A social analysis of blues culture, the first of its kind, was undertaken by University of North Carolina sociologists Howard Odum and Guy B. Johnson in the 1920s and 1930s. Their Negro Workaday Songs (1925) remains a classic examination of the social and cultural roots of the blues. Durham's rise as an important stop on the growing blues circuit proved beneficial to Odum, who began collecting lyrics and melodies of folk blues as early as 1905. Odum's research revealed important links between blues lyrics of the younger performers and the dislocation of many African Americans caused by the poverty of southern agriculture and the lure of northern industry. The recurring themes of traveling and prison reflected the rise of a segregated South that imposed strict vagrant laws and used chain gangs to keep cheap African American labor in the region.

The blues continue to thrive in North Carolina. The rise of the Chicago blues, which featured electrified instruments, led to the formation of full blues bands by the 1950s, and eventually these influences migrated to the state. By the 1990s the state boasted a number of strong amplified blues ensembles, including Skeeter Brandon and Highway 61 and Steady Rollin' Bob Margolin. The Durham Blues Festival, one of the first blues festivals held in the South, began in 1973 and features nationally recognized blues acts. Raleigh and Charlotte are regular stops for big names such as Buddy Guy, while Durham, Winston-Salem, and Greensboro all offer steady diets of local performers and blues societies for aficionados.

William Barlow, "Looking up at Down": The Emergence of Blues Culture (1989).

Lawrence Cohn, Nothing But the Blues: The Music and Musicians (1993).