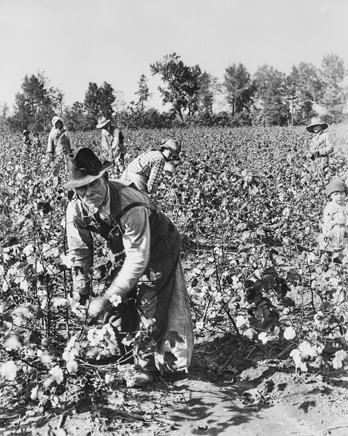 Agriculture has been a principal component of North Carolina’s economy and culture throughout its history. For centuries before European settlement, the region’s Native Americans had cultivated a variety of crops, such as corn, sunflowers, squash, pumpkins, and beans. Over time Indians situated their communities near rivers and streams to take advantage of the fertile soil, and many native cultural traditions grew out of the seasonal rhythms associated with agriculture.

The land that Roanoke governor Ralph Lane in 1585 described as the ‘‘goodliest soil under the cope of heaven’’ beckoned to European settlers. After gaining title to a tract in the backcountry, typically through a land grant, these early American farmers cleared the forests by the process of ‘‘slash and burn,’’ or girdling, so the soil in which they grew could be planted with crops. Colonists brought from Europe fruits, grains, and vegetables and, under the guidance of the Indian population, added corn, potatoes, and varieties of peas and beans.

Precolonial and colonial North Carolina was characterized by an agrarian economy that involved approximately 90 percent of its inhabitants—primarily small farmers, often referred to as ‘‘yeomen,’’ who engaged in subsistence farming. This trend continued through the antebellum period and beyond, as North Carolina remained a state of small farms. In some instances the agricultural labor force, largely comprised of indentured servants and slaves, enabled a land-owning, or gentry, class to attain wealth and profit in a growing export economy.

In the twentieth century, the state’s agriculture underwent a seismic transformation. Advances in farming techniques and technology, as well as shifting social and economic realities, left only a fraction of the small farms that once occupied practically every North Carolina county. Trends in the industry were reflected by the new name given to the state agency charged with overseeing farms: in 2001, with the election of the first female commissioner of agriculture, Meg Scott Phipps, the agency was recast as the Department of Agriculture and Consumer Services. Despite these changes, agriculture in various forms has remained a large segment of the economic bottom line in North Carolina. Including crops, floriculture, livestock, and forest products, it contributed approximately $60 billion annually to the state’s economy in the early 2000s, when about 20 percent of the workforce was employed in agriculture-related industries, including 56,000 farmers growingmore than 80 different commercial products.