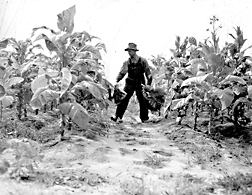 Although for centuries tobacco was North Carolina’s premier crop, other products—including field crops, vegetables, livestock, and Christmas trees—have come to comprise much of the state’s agricultural industry. However, tobacco is still important. In the early 2000s North Carolina continued to lead the nation in both flue-cured (flavorful and aromatic) and burley (dark-leaf filler) tobacco production, with about 125,000 harvested acres yielding 275 million pounds of product worth more than $600 million annually. Tobacco growing has remained a way of life for thousands of North Carolina farmers.

The importance of several other crops and products has increased over the years. Cotton was by far the state’s major commercial crop before the Civil War; it was grown for household use almost from the earliest days of settlement. North Carolina’s nineteenth-century ‘‘cotton kingdom’’ consisted of about a dozen eastern counties bounded by the towns of Halifax, Goldsboro, and Washington and the southern counties bordering South Carolina from Robeson to Mecklenburg. Of these counties, 12 produced more than 4,000 bales of cotton in 1860. Cotton production underwent several fluctuations and finally diminished during the Great Depression. Nevertheless, the quality of North Carolina cotton lint has generally remained above average, and the yield per acre is usually the highest in the South. By the early 2000s, cotton accounted for approximately $300 million of the state’s gross farm production.

North Carolina’s livestock, plant, and forest products experienced the greatest increases in the last few decades of the twentieth century and the early years of the twenty-first. Livestock such as hogs ($2 billion), broiler chickens ($2 billion), turkeys ($449 million), cattle ($258 million), as well as byproducts such as eggs ($240 million) and milk ($171 million), have come to dwarf other commodities in total production and value. Greenhouse and nursery products, including garden and bedding plants, potted foliage and flowering plants, and perennials, account for about $830 million of the state’s agricultural yield. North Carolina has also become one of the nation’s leading producers of Christmas trees, with approximately 1,600 growers accounting for about $100 million worth of trees annually.