Part ii: Improvements in Farming Technology and the Burgeoning of "Mega Farms" 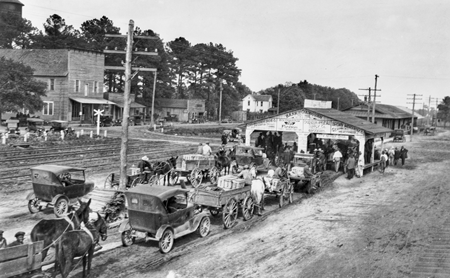 For the vast majority of North Carolinians involved in agriculture, the farming life was hard, bitterly so in many instances, with problems ranging from insect infestations to plant diseases and exhausted soil. By the 1820s, in fact, many North Carolinians—most of them descendants of original settlers—had moved west to greener pastures in Alabama and Mississippi. Efforts to lift farmers and their families from the lower rungs of society and improve farming practices took many forms in the state. In nineteenth-century North Carolina, as elsewhere in the South, considerable activity went toward agricultural reform, including the creation of the State Agricultural Society in 1818, a centralized state agricultural department in 1877, and the North Carolina College of Agriculture and Mechanic Arts (present-day North Carolina State University), the state’s major land grant institution, in 1887.

The twentieth century brought further efforts to assist farm families. Agricultural extension agents in every county taught farmers the principles of crop rotation, deeper plowing, improved seed selection, crop diversity, and the correct use of fertilizer. Rural youths were served by a host of organizations. Governor O. Max Gardner, elected in 1928, stated in his inaugural address that ‘‘one of the major aims of my administration shall be to improve agricultural and rural life in North Carolina.’’ This led to a proliferation of experiment stations designed to give farmers up-to-date information about a variety of subjects. The modern-day Department of Agriculture and Consumer Services offers an array of educational and professional services to farmers in North Carolina.

North Carolinians in some cases were slow to adapt to new discoveries and inventions that promised more efficient and productive farms, choosing instead to continue traditional methods. Many early farmers relied on hoes and other hand tools—rather than plows—to till the land. Early plows were expensive, inefficient, and frustrating to maintain. Some farmers believed that the iron points and moldboards poisoned the soil. Many large-scale planters rejected plows, claiming that their owned enslaved people and other laborers often ruined them by improper use.

Improvements in iron and steel technology in the mid-nineteenth century finally produced affordable and properly shaped plows that reduced drag and were self-cleaning. Around the outbreak of the Civil War, a revolution in plowing began to take place, and new designs—including ‘‘gang’’ plows, with several working plow bottoms, and steampowered riding or ‘‘sulky’’ plows—enabled farmers to plow larger fields more quickly and efficiently.

Mechanization and improved fertilization and cropgrowing techniques shaped the agricultural revolution of the twentieth century. In 1924 the invention of the Farmall rowcrop tractor led to further advancements in farming methods and production. Now tractors could be used not only to plow fields but also to draw cultivators through standing crops. The use of tractors led to greater use of larger tillage implements, such as disk harrows for field preparation and rotary hoes for cultivation. The widespread use of tractors also significantly reduced the need for beasts of burden, although many growers continued to depend on walking plows and other simple, old-fashioned implements to work their farms.

By the mid-twentieth century, commercial agriculture on huge ‘‘mega farms’’ with high-tech equipment began to supplant individual, family-owned farming in North Carolina. Yields for crops such as corn, tobacco, wheat, cotton, soybeans, and peanuts rose dramatically with improved fertilization and hybrid development, requiring much less land and fewer workers. This trend continued through the end of the twentieth century, with the number of farms in the state dropping from 301,000 in 1950 to fewer than 60,000 in 2000. North Carolina farms continue to be lost at the rate of 2,000 per year.

Decades, and in some cases centuries, of plowing fields had devastating effects in North Carolina. Years of spring and fall plowing combined with excessive cultivating practices created severe soil erosion and infertility. Although efforts to combat soil erosion began in earnest in the 1930s, it was not until the 1980s, with the introduction of new tillage equipment and methods, that centuries-old plows were wholly replaced by less invasive implements. ‘‘No-till’’ or ‘‘minimum-till’’ agriculture was developed to reduce soil erosion, chemical runoff, and the use of costly fuel. No longer is the soil literally turned over, spring and fall, exposing it to erosion-causing wind and rain. Some modern farmers only chisel their fields once a year in preparation for planting, and no-till planters do not require any soil preparation. But tobacco farmers still rely to a greater extent on moldboard plows to prepare their characteristic ridged fields than do farmers who grow corn, soybeans, and cotton.

Modern farming and the associated practices of drainage, fertilization, mechanization, and mass production for special markets have produced a revolutionary efficiency in North Carolina agriculture. Although the state has above-average rainfall, there are critical periods when several weeks of drought may determine success or failure for the season’s crops. Irrigation on its current scale is relatively new to the state, largely a phenomenon of the last decades of the twentieth century. In the United States as a whole, more water is withdrawn from rivers, lakes, and wells for agriculture than for any other use. About 47 percent of these freshwater withdrawals are for irrigation, using methods such as coordinated sprinkler systems, trickle-and-drip systems, and underground pipes.