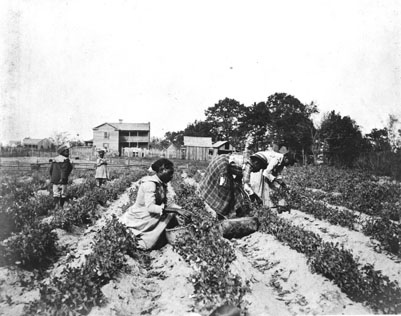 Sharecropping was the mode of labor that supported much of North Carolina's postslavery plantation economy. During Reconstruction, this system of tenant farming offered both planters and laborers, African Americans as well as some poor whites, incentives over the gang labor that predominated during slavery. Planters, strapped for cash in a postbellum economy where money was scarce, offered laborers housing, a mule, tools, and seed to farm a small plot of the planter's land. In return, the sharecropper bought provisions on credit from the planter and reserved the sale and one-half to three-quarters of the crop for the planter. For laborers, sharecropping eliminated the pain and humiliation of gang labor and allowed freedmen to move their families out from direct supervision of white supervisors.

Despite the benefits some sharecroppers accrued from the system, planters profited more. Employers throughout the South constructed a form of sharecropping that contributed to the horrific poverty of African Americans in the region. Planters, faced with a severe labor shortage at the close of the Civil War, used sharecropping to develop a labor-repressive economy that enabled landowners to maintain economic and political dominance. Sharecropping contracts, designed for a year-long obligation, favored the rights of employers; and Freedmen's Bureau agents, ostensibly the freedmen's advocate, often encouraged freedmen to sign contracts in order to restore stability and order to otherwise chaotic economic conditions. North Carolina laws reinforced planter dominance over croppers. The law defined sharecropping as wage labor. Therefore, croppers were subjected to more managerial supervision than tenants who merely rented land from planters and provided their own supplies. Furthermore, crop lien legislation gave landlords control over the crops, which prevented croppers from selling their goods to merchants elsewhere for better prices.

Economic conditions worsened in the 1880s and 1890s as cotton prices plummeted from 18 cents a pound in 1868 to 5 cents a pound in 1894. North Carolina's poor economic infrastructure offered few forms of credit. The crop lien system intensified laborers' misery as sharecroppers, bound to planters and merchants, pledged their growing crops for food and supplies at interest rates that ranged from 25 percent to 100 percent. By the 1890s, many yeomen, tenants, and sharecroppers revolted against landholders by forming Farmers' Alliances, which established the Populist Party in the mid-1890s. Black and white yeomen, tenants, and croppers drew together to promote reform policies that included the Subtreasury Plan, a system of warehouses intended to store crops until market prices improved. Eventually, the Populist Party dissipated due to friction between leaders, who usually owned land, and rank-and-file tenants and sharecroppers.

Gerald David Jaynes, Branches without Roots: Genesis of the Black Working Class in the American South, 1862-1882 (1986).

Hi, i am doing a educational

Hi, i am doing a educational project of the great migration and ill like to use your photograph to show in my work visual information about sharecropping. I would include all specification of the copyright of the image and tell from were i have taken it. Thanks for the appreciation,
Juan Fran Puyó