The Subtreasury Plan was among the leading political issues of the 1890s in North Carolina and other states. The plan sought to revolutionize credit and marketing arrangements for staple crops, particularly cotton. A prominent version of the Subtreasury Plan required the federal government to construct warehouses, or subtreasuries, in counties that marketed crops with an annual value of $500,000. At harvest, farmers could deposit crops in the warehouses and receive negotiable federal notes for up to 80 percent of the value of the crops. The farmer had one year to sell the crop and then satisfy the notes and a 1 percent per year interest charge. A fee for storage would also be charged. Unsold crops could be liquidated at auction. 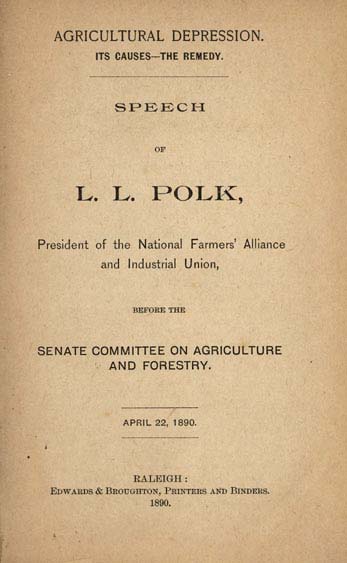 The Subtreasury Plan was radical because agricultural credit in North Carolina in the 1890s was generally provided by merchants and landlords. Credit from these sources, which was necessary to see a farmer through the growing season, was always expensive and often extortionate. Consequently, the Subtreasury Plan sought to revolutionize rural credit by transferring its burdens and profits from local private lenders to the national government.

The political force behind the Subtreasury Plan was the Farmers' Alliance. The national Alliance, influenced by the failure of its marketing and purchasing cooperatives, endorsed the scheme at its 1889 meeting in St. Louis. Historians have disagreed about the origins of the Subtreasury Plan. Some have credited it to Charles W. Macune, a leading member of the Farmers' Alliance in Texas, who presented the plan to delegates in St. Louis. Others have stressed the contribution of Harry Skinner, a Greenville lawyer. Skinner, who would later become a Populist congressman from North Carolina, wrote articles in 1888 and 1889 supporting a government warehouse and note scheme. One of his writings, published in Frank Leslie's Magazine in November 1889, was read to the Farmers' Alliance delegates in St. Louis. North Carolinian Leonidas L. Polk, a member of the committee led by Macune that presented the Subtreasury Plan in St. Louis, was aware of Skinner's proposal.

The Subtreasury Plan became the leading political issue among North Carolina Alliance members in 1890. The principal figures in the ensuing contest were Polk, president of the national Farmers' Alliance, and North Carolina's Democratic U.S. senator, Zebulon B. Vance. In early 1890 Vance agreed to introduce the Subtreasury Plan in the Senate, but he expressed his personal opposition to the proposal. Vance's opinion, based on his conviction that Congress lacked constitutional authority to loan money directly to citizens, prompted a storm of criticism from the official organ of the North Carolina Alliance, Polk's Raleigh-based Progressive Farmer. The attack on the Democratic leader, in turn, engendered hostility toward Polk by opponents of the Alliance and even many Alliance members. Polk's antagonists portrayed the Subtreasury Plan as a wild and paternalistic interference by government in private finance. Although the Subtreasury Plan was endorsed by several local North Carolina Democratic platforms in 1890, and Alliance members extracted pledges of support for it from many Democratic candidates, the controversy divided the party in the elections held that year.

The Polk-Vance conflict was the high point of Subtreasury Plan politics. To be sure, thousands of North Carolina farmers continued to promote the plan after 1890. It was reaffirmed directly or indirectly at each of the Alliance's national and state meetings until 1896. Moreover, with the appearance of North Carolina Populism in 1892, the idea won formal support from a statewide political organization. North Carolina Populists defended the Subtreasury Plan through the 1890s. Yet widespread discussion of the plan by the Alliance and the Populist Party declined sharply after 1892, and the measure was never seriously considered by Congress.

The Alliance's Subtreasury Plan pitted private lenders and laissez faire ideologues against the credit and marketing interests of a new class of commercial farmers. North Carolina growers were caught between the crippling forces of expensive credit and declining prices and the presumed benefits of commercial production, and many concluded that the Subtreasury Plan was a panacea. However, the plan had significant weaknesses. First, it would serve to encourage, not control, production. There was therefore no guarantee that the federal government would not be left with enormous bad debts if prices driven by increasing surpluses declined below the value of the notes. The Subtreasury Plan also did not address other market constraints, including purchasing monopolies and foreign competition that could push prices below the cost of production despite the availability of inexpensive loans. On the other hand, conservatives' unequivocal rejection of the plan was unwarranted. The crop financing system of the late nineteenth century was patently unjust, and the government's currency contraction policy was equally antidebtor. By creating general access to cheap capital, and by seeking to create more equitable markets, the Subtreasury Plan attempted to resolve two genuine hindrances to southern rural capitalism. The plan's proponents hoped to create both more competition and greater financial independence for farmers by arguing that the government was the appropriate dispenser of rural credit.

John D. Hicks, The Populist Revolt: A History of the Farmers' Alliance and the People's Party (1931).