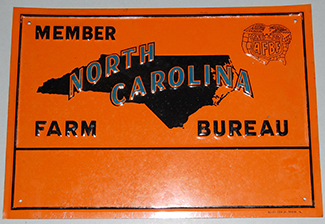 The Farm Bureau Federation is North Carolina's largest general farm organization, offering a diversity of activities, programs, and services to meet the state's agricultural needs. No record exists of the election of the organization's first board of directors, but on 2 Mar. 1936 chairman J. E. Winslow called the first meeting to order in the county agent's office in Greenville. The Farm Bureau grew quickly by supporting vital issues such as improved farm-to-market roads; cooperative hail and storm insurance; coordination by state and federal agricultural organizations to prevent dual administration; research and extension work; revision of state feed, fertilizer, and seed laws; and the establishment of a maximum interest rate of 3.5 percent on federal farmland loans. Bureau headquarters moved from Greenville to Raleigh in 1938, to Greensboro in 1940, and finally back to Raleigh in 1958. In 1942 farm women became members and gained a voice in affairs by forming what would become the Women's Committee. The first county offices of the Farm Bureau opened in 1954. Eventually there would be at least one office in all 100 counties.

With a membership that has grown from about 2,000 initially to more than 470,000 by the early 2000s, the North Carolina Farm Bureau Federation has remained the state's "voice of agriculture."

We had a house fire back on

We had a house fire back on